Crimes of Black Lives Matter Mounting, Arrests Should Too 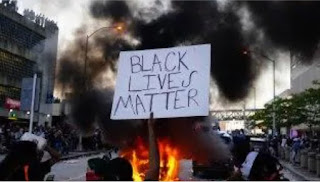 On Saturday two Los Angeles Sheriff Deputies were shot in their patrol car by a Black Lives Matter ally. Both officers have been hospitalized and both are currently in critical condition. The lone gunman was a young black man, believed to be in his late twenties.  Then, after the officers went into the hospital for care, Black Lives Matter protesters blocked the entrance and exits of the hospital where the cops were taken calling for their deaths.

Just recently in Portland, Oregon a member of a pro-Trump group called Patriot Prayer was hunted down like he was prey, with a person on the street calling out "we got a couple of them right here" for the shooter, and then he was executed by the shooter, dying in the arms of his friend.
In New York protesters blocked the George Washington Bridge as they marched across it taking up the entire width of the structure.  Then, the protesters went out of their way to clash with police in Washington Heights.

These are simply more chapters of Black Lives Matter influenced and encouraged violence that has erupted in Los Angeles, Seattle, New York, Chicago, Portland, Minneapolis, and just about every other large Democrat-controlled city around the country.  We have witnessed rioting, looting, and generally animalistic behavior by Americans that have most folks bewildered and confused about how it could be possible that this kind of madness is going on in the United States of America.

The reality is, killing police officers, or gunning them down as we saw in Los Angeles, is a crime that is often punishable by death.  Blocking vehicular traffic is a crime.  Burning property is a crime.  Looting is a crime.  Resisting arrest is a crime.  Obstructing justice is a crime.  Assaulting police officers in any manner is a crime.  Every so-called protester in each of these cities causing havoc, looting, burning property, and clashing with police should be arrested.  They are criminals.  Black Lives Matter is encouraging criminal behavior because they are a terrorist organization.  And the sad thing about it is that everything they claim is a lie.  They don't care about black lives.  It is Marxist agitation.  The founders of Black Lives Matter have admitted on film that they are trained Marxists.
They are committing violent insurrection, which is something that is not only treasonous, but the federal government has constitutional authority to break the back of such activities.  It is time for this to stop.  It is time for President Trump to roll up his sleeves and declare Black Lives Matter, Antifa, and their allies as being domestic terrorists, and arrest every person who has been breaking the law in the name of these terrorist organizations.
-- Political Pistachio Conservative News and Commentary
Posted by Douglas V. Gibbs at 10:57 AM