Democrats ignore Constitution, Natural Law, and their own rules, in Barrett Hearing 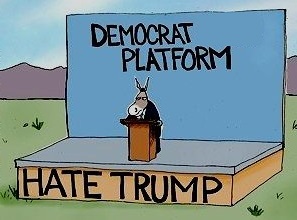 In 2017 Democrat Senator Dianne Feinstein attacked Amy Coney Barrett's faith, saying, "the dogma speaks loudly within you," and then voiced her concern for Barrett's strong faith in Christ. Now, the Democrats are again violating the U.S. Constitution's Article VI. clause by applying a religious test to Barrett's nomination for a seat on the United States Supreme Court. Her religious views on homosexuality, abortion, and other issues, places the Democrats in a panic. Godliness stands against their vile and evil platform.

Another thing that frightens the Democrats is that Judge Barrett is a constitutional originalist. She stated in her opening statement she believes judges are supposed to rule based on the law as it is written. Since healthcare is not listed as an authority vested in the federal government in the U.S. Constitution, that means she would likely, in addition to ruling against gay agenda demands and pro-abortion items, rule against federal intrusion into the private health insurance industry as we have seen with the Affordable Care Act.

Not only, by taking these routes, are the Democrats violating the U.S. Constitution, but they are also going after Barrett based on how they think she will rule in the future, a move that goes against a rule established by the Senate, and is known as "The Ginsburg Rule." In fact, Ruth Bader Ginsburg was very strict about her position on her future rulings, refusing to discuss anything about how she may rule in the future, and explaining that nobody, including the press or other politicians, had any business demanding from a justice how they might rule in the future.

Democrat Presidential Candidate Joe Biden was also a defender of the position of not going after judges regarding how they might rule in the future. In 1993, as Confirmation Chairman regarding Ginsburg's confirmation hearing, "he established certain rules for questioning nominees -- rules that some of his fellow Democrats seem to have conveniently forgotten...The Biden rules stipulated that she had no obligation to answer questions about her personal views or on issues that might come before the Court. Despite her silence, the Senate confirmed Ginsburg, 93-3...last week, three Democratic senators -- Patrick Leahy, Richard Durbin and Chuck Schumer -- were already promising to violate the "Ginsburg Rule," not to mention the Model Code of Judicial Conduct...Canon 5 of the Model Code, among others, forbids judges or judicial candidates from indicating how they will rule on issues likely to come before the courts or making any statement that would create the appearance they are not impartial. This rule is critical to an independent judiciary. Justices must remain open-minded when an actual case comes before them. They must not even hint how they would rule...Senator Biden [in 1993] began the hearing by noting that nominees almost never testified during their confirmation hearings prior to 1955. In 1949, one nominee was called to testify but refused and was still confirmed. Biden warned senators not to ask questions about "how [Ginsburg] will decide any specific case that may come before her." Ginsburg, then serving on the same court as Judge Roberts does today, followed Biden's roadmap...Near the end of her hearing, Ginsburg explained, "my own views and what I would do if I were sitting in the legislature are not relevant to the job for which you are considering me, which is the job of a judge."...Senators Leahy, Durbin and Schumer already have announced they won't honor the Ginsburg Rule for Republican nominees. They are certain to ask inappropriate and wrongful questions."

In fact, so far the Democrats have asked or said nothing regarding Barrett's record as a judge, or the fact that the American Bar Association has given her their highest rating. Their focus has been on how she is a threat in the future based on how they believe she will rule in the future. In his opening statement, Senator Lindsey Graham called them on all of it.

The Republicans have also recognized the liberal left's religious bigotry, a hatred for Christianity that has been emerging quite a bit, lately.

As Democrats like Senators Booker and Blumenthal during the first day of the confirmation hearing said, they believe there is nothing normal about this hearing, and that common sense is under threat.  In truth, they were actually simply revealing how little they know about the Constitution (or how easily they were willing to violate it). They are afraid Judge Barrett will join the other constitutionally minded justices on the High Court in stopping the Democrats from violating your right to keep and bear arms, the right of the unborn not to be murdered in the womb, and the radical attacks on our culture by extreme groups, agendas and ideologies that the Democrats not only support, but encourage.
The fact that Barrett clerked for Justice Scalia and holds what his views were regarding the Constitution scares them. The Constitution scares them. It is an obstacle for their hard left plans to change America into something the Founding Fathers never intended. As was Scalia's reasoning, so is hers. As she explained in her opening statement when talking about her judicial philosophy, as well as Scalia's, "A judge must apply the law as written, not as the judge wishes it were. Sometimes that approach meant reaching results that he did not like. But as he put it in one of his best known opinions, that is what it means to say we have a government of laws, not of men."

Finally, both Kamala Harris and Joe Biden have avoided the court packing question. The Democrats have on numerous occasions said that if they can't get their way politically, they will pack the Supreme Court with their own judges to force a Democrat majority. When exposed, they did what they usually do, and pointed fingers back at the Republicans.  According to the Democrats, it is actually the Republicans packing the court, calling the confirmation hearing of Barrett an example of the GOP packing the court. How stupid do they think we are? Packing the court with additional justices is not the same thing as President Trump constitutionally nominating a candidate, and the Senate constitutionally working on confirming that candidate. And to be honest, they are lucky there is at least a confirmation hearing going on, because the hearing is not constitutionally required. Only the confirmation vote is.

In the end, however, this is all a good thing. As usual, the Democrats are revealing to the rest of America what we've known they are all along. Anti-American, anti-Constitution, and Anti-Christian. And yet, somehow, they think letting us know those things about them will help them regain power ... which, by the way, is what it is all about when it comes to the Democrats. Power.