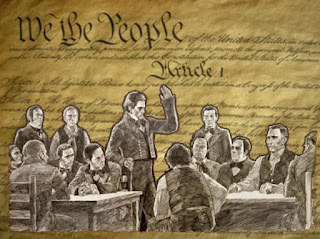 On Thursday Night I will begin a new Constitution Class in Carlsbad, California. My class is not political, it is an examination of the United States Constitution based on the writings, notes, debates and correspondence of the time period. There is no partisan interpretation, simply what the Framers of the Constitution intended based on the evidence we have from them. The class is being promoted through EventBrite: https://www.eventbrite.com/e/constitution-classes-14-weeks-tickets-127825023085

The hatred the anti-American social media, such as Facebook, has for anything not in full agreement with their radical, hard left, progressivism includes hatred for the document that established our system of government, and the principles of liberty and individualism the document espouses.  We know this because the Facebook promotion of the above link the hosts of the Constitution Class in Carlsbad had on Facebook has been removed from the social media website.
Think about that.  The hatred by the folks at Facebook for anything not in line with their ideology extends to the Constitution of the United States, and like a bunch of book burners, they are willing to censor the Constitution out of existence.
-- Political Pistachio Conservative News and Commentary