"Our Country Is Broke" 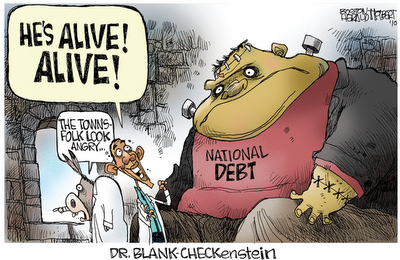 I dunno, Professor Kotlikoff, this might be too much truth for even Senate Republicans to handle:

To those who say that U.S. government debt is easily manageable, Boston University economist Laurence Kotlikoff has a sobering reply.

"Our country is broke. It's not broke in seventy-five years or fifty years or twenty-five years or ten years. It's broke today," he told the Senate Budget Committee. "Indeed, it may well be in worse fiscal shape than any developed country, including Greece." [emphases added]


Shit your pants yet?  I bet Chairman Enzi did.

And what about official figures showing that federal government debt is "only" 74% of GDP? "Unfortunately, the federal debt is not an economic measure of anything, including our nation's fiscal position," Kotlikoff argued. "Instead, the federal debt and its annual change, the deficit, are purely linguistic constructs that reflect how members of Congress choose to label government receipts and payments."


Oh, my.  It's like Barack Obama is the Wizard of Oz, and Professor Kotlikoff just threw back the big green curtain.

For example, that figure omits the almost $750 billion the government is collecting this year in Social Security payroll taxes from workers and the future Social Security transfer payments these FICA contributions secure, he explains.

"Were we to go back in time and re-label all past Social Security taxes as borrowing, official federal debt held by the public would not be $13 trillion, but $38 trillion, which is 211% of U.S. GDP." [emphasis added]


Wow, I think I just soiled myself.


And there it is.  Not that we haven't mentioned this before.  In fact, my remarks from seven months ago bear repeating here:

I'm reminded of something UC-Berkeley astronomy professor and "celebrity scientist" Alex Filippenko once said on an episode of The Universe (paraphrased): "Numbers like millions, billions, and trillions are difficult for most people to grasp, because most people have never had millions, billions, or trillions of anything." There's also the old saying, "One death is a tragedy; a million deaths is a statistic." Figures of that magnitude are abstractions; there's no way to make them "real" to the average layman. So you have to explain it in terms of the actual, real-world, on-the-ground impact: economic collapse, societal breakdown, higgledy-piggledy chaos. But since no American below the age of ninety has ever lived through and experienced such calamities firsthand, such warnings are no more 'real" to them than the incomprehensibly huge dollar figures driving them.

And that, gentles, is why nothing is ever done about the debt. It's been high on the issues list for over thirty years, and yet the factors driving it ever skyward - Social Security, Medicare, Medicaid, and now ObamaCare - have stubbornly remained political "third rails," guaranteeing that nothing will ever be done about them until they drive the nation into inevitable, inexorable fiscal and economic collapse. And when that happens, the public's reaction will be just like it is in the movies: Crying out for somebody to "do something," as long as they benefit from it and they don't have to pay for it. Anything other than that will bring out the hissing torches and pitchforks....

210 trillion dollars, folks. That's fifteen years of U.S. economic output at the current rate, assuming nothing else but paying off that "national credit card". Which means no eating, no heating, no driving, no flying, no clothing, no entertaining, no living. Absolute and utter, universal slavery for a decade and a half. The Ultimate Austerity. Which would, in practical terms, mean an immediate economic collapse and violent revolution. Allow a subsistence level of "living," and maybe it becomes thirty years of slavery, with merely an overwhelming likelihood of violent revolution in the very near-term. And you do know, of course, who are "massah" would be.


Of course, there is a way out: Immediately shrink federal spending back within constitutional boundaries, which would eliminate about four-fifths of the federal budget.  That would lower the debt back to the "on-books" $18 trillion level.  Keep taxes at their current rates, run multi-trillion dollar surpluses for a decade, then get rid of the income tax and go back to taxing the States, based on proportion to the census, or enumeration, in accordance with Article I, Section 9, Clause 4, and sit back and watch the American economic golden goose rise, phoenix-like, from the Obamunist ashes.

And, in the words of Montgomery Scott in Star Trek III, "If my mother had wheels, she'd be a wagon."  It is, in other words, politically impossible.

The endgame of this global cesspool won't be pretty, says Jeremy Warner, assistant editor of the Daily Telegraph. "The world is sinking under a sea of debt, private as well as public, and it is increasingly hard to see how this might end, except in some form of mass default," he wrote. [emphasis added]


And thence, collapse, chaos, and dictatorship.

That may be too much truth even for Professor Kotlikoff.  But that cat would escape its bag sooner or later.

Wish we could join the former, seeing as how we'll be the ones left holding the latter.