Obama to States: Accept Refugees, Or Else. . . 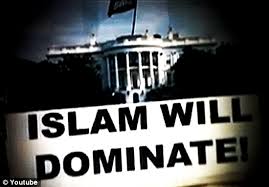 The last time we had a President of the United States with a basic working knowledge of the United States Constitution was Ronald Reagan.  He was one of three during the twentieth century, including Calvin Coolidge and Warren Harding.  So, getting a president who is willing and able to defend, preserve and abide by the U.S. Constitution is constantly a tall order.  Oh, by the way, there has been exactly zero in the twenty-first century, and based on what's available in 2016, in this century we are destined to continue to bat nil.

Of the U.S. Presidents since 1900, a few of them were not only ignorant of the U.S. Constitution, but were downright hostile to it.  Few in American History, however, have shown the amount of hostility, and willingness to blatantly stomp all over the law of the land, like President Barack Obama.

In his latest defiance of constitutional principles, Obama has decided to threaten any States who refuse to accept the Muslim refugees his federal government are trying to unconstitutionally force upon the various States.

According to Obama, the States have no constitutional grounds to refuse his dictatorial edicts, especially when it comes to immigration, or "refugees".

So, let's break down immigration and refugee authorities as they appear, or don't appear, in the Constitution.

The powers afforded the federal government on these issues are as follows:
No place in the U.S. Constitution is the federal government given the authority to force States to accept persons who are not citizens.  The Privileges and Immunities Clauses of Article IV. and the 14th Amendment do not apply to non-citizens, and therefore the States are not required to treat non-citizens who are in their States illegally with the same "protection under the law" attitude as they are required to treat citizens.   Also, there are no prohibitions in the Constitution regarding how the States may treat immigrants who have refused to reside legally, and since it is a State's business how they may protect themselves internally, it is constitutional for a State to refuse to accept illegal aliens, or refugees, and to deport them accordingly.  It is none of the federal government's business how a State operates internally.  Their internal issues are their business, except in certain cases as prescribed by the Constitution (such as the equal protection of all citizens under the law).

However, Obama's Office of Refugee Resettlement (ORR) told State resettlement officials they may not deny benefits and services to refugees based on their country of origin or religion.

The letter also indicated that the heavy Federal boot of compassion will come down hard on the necks of those who do not comply and bend to the will of Obama.

The office then referred to the 1964 Civil Rights Act which disallows racial discrimination (once again, that does not apply to non-citizens who have refused to follow the law).

The Federal government is also threatening extortion, which is the willingness to withhold all federal financial assistance to those States rejecting acceptance of members of the Muslim invasion.

Two dozen Republican governors have indicated they will not invite ISIS militants into their States and said they would resist refugee placement.  They provided a letter to Obama citing their concerns and reminding him of strong public sentiment against the program.

In the House of Representatives a bill was approved that would improve screening for Iraqi and Syrian refugees. The bill does not halt the refugee influx, it questions the ability of the immigration department to properly vet refugees, and is demanding stronger procedures.

Obama claims the vetting process is already thorough and can take two years to complete.

The bill requires comprehensive background checks of every refugee from Iraq or Syria before they can be admitted into the United States and certification that each does not pose a threat.  As we have examined, just because a Muslim is not violent, it does not mean they are not committing jihad.

“While the United States has the most generous refugee system in the world, the American people are rightly concerned about admitting Syrian refugees and the impact it would have on the safety of their families and neighbors,” Goodlatte, R-Va., said in a statement.

“In light of these concerns, the majority of state governors have taken positions that reflect the views of their residents. It’s hypocritical for Obama Administration officials to threaten enforcement action against these states when they refuse to enforce the vast majority of our immigration laws, such as cracking down on sanctuary cities that openly defy federal law and endanger the American people,” he said.

Obama has promised to increase the number of refugees coming into this country, and he has vowed to make sure the States accept them.

If the States, even after the extortion and threats, continue to refuse accepting the "refugees," is Obama then going to move in with military troops to force the States into compliance with his royal decrees?

The states and the people have every right to not send money to the Federal government.

This is a clear demonstration of why states, counties, and municipalities should never accept Federal money, regardless of the rationale. But politicians react to "free money" the way cats react to catnip: Once scented, they can't bear to let it go.

People of the United States to hussein Obama, 'Fuck off'.

Frankly the Governors should just arrest the people doing the resettlement, case closed, problems solved. They can also rescind their approval of them operating in the state. If they really want to stop this its would not be hard to enforce