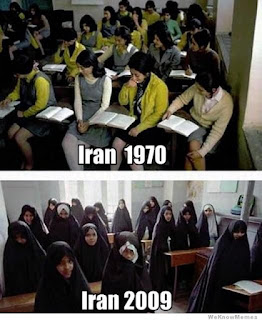 When I entered the United States Navy, the first vessel I was stationed on was the USS Chandler, DDG-996.  The guided missile destroyer was a part of a unique quartet of ships.  I arrived on the vessel in January of 1985.  It had been commissioned in 1982.  It was a part of the Kidd Class.  The ships in the class were the USS Kidd, the USS Scott, the USS Callahan, and the USS Chandler.

The four ships were originally ordered by the Shah of Iran, Mohammad Reza Pahlavi, for his Iranian Imperial Navy.  However, they were never delivered.  The Spruance hulls remained in the United States when, prior to delivery, the Islamic Revolution engulfed the country of Iran, which resulted in the removal of the Shah from power, and the establishment of a Muslim totalitarian theocracy with the Ayatollah Khomeini grabbing the reins of control.

During the revolution the Hostage Crisis also emerged. The Iran hostage crisis lasted 444 days, during which fifty-two Americans were held hostage.  It began November 4, 1979, and lasted to inauguration day for Ronald Reagan on January 20, 1981.  The hostages were held by a group of Iranian college students who supported the Iranian Revolution.  They took over the U.S. Embassy in Tehran, where they held the hostages.

The United States then took the destroyers and converted them to guided missile destroyers, packing them with the most advanced weaponry of the time.  Then, after jacking these ships up with powerful weaponry, the West Coast ships, Callahan and Chandler, became regular visitors to the Persian Gulf.

The Islamic Republic of Iran has been a challenge ever since.  Now, they've become so hostile that the United States, under Trump, has recently made preparations against a possible Iranian attack.

The United States Navy has mobilized, sending ships, and missiles, to the Middle East.

Among those missiles is the Patriot system, which has been deployed in the area before, mostly for the purpose of protecting Israel from her dangerous Islamic neighbors.

Are we on the verge of war?  Could the decades of tension caused by Iran be coming to a head?

The next few weeks may reveal the answer.

-- Political Pistachio Conservative News and Commentary
Posted by Douglas V. Gibbs at 12:00 AM