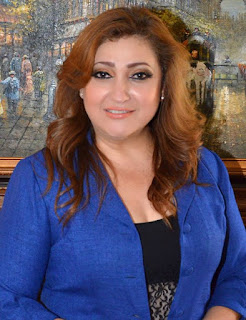 Republican Candidate for Congress Jazmina Saavedra is facing accusations of discrimination against transgender individuals after her “videotaped harassment of atransgender woman who used a ladies’ room at a Los Angeles Denny’s.”

Criticscall her “evil,” “homophobic,” “on the wrong side of history.”  She’s been told she has cursed her family to a lifetime of embarrassment, and should be “sued and put in jail.”

Jazmina Saavedra is a Republican candidate running for the 44th CongressionalDistrict of California, a district located in Los Angeles County south of East Los Angeles.

The Golden State Coalition, a political group of Christian and conservative candidates that Jazmina belongs to, responded about the incident with a press release with the headline, “Golden State CoalitionDenounces Deviant Behavior of Man in Los Angeles Denny’s Restaurant LadiesRoom.”  According to the article, for Saavedra, the situation was “startling”.  She objected to the man in the ladies’ room, and filmed the incident to expose how in California the security and privacy of women are being violated, and the Democrats in California have been passing legislation to support the dangerous conditions women are now being forced to confront.

Saavedra explained to me that she originally went into the bathroom to brush her teeth.  When she opened the door she heard the voice of a man coming from an occupied stall.  Her first instinct was that she had entered the wrong restroom, so she walked back out to take a look at the sign.  When she confirmed she had entered the correct bathroom, she became concerned that what she had walked in on could have been a situation where a man was waiting for a woman to enter so that he could attack her.  She later discovered that other women in the restaurant felt the same way.  A couple of women seated near the restroom, and a small girl at a different booth, told Saavedra that they were fearful about going to the bathroom because of the man who had gone in there.

Saavedra notified a waitress, who investigated the matter.  When the waitress returned, she told Jazmina that the person inside the stall told her he was a woman.

Concerned that a man using a women’s bathroom may be a serious personal safety issue for women, Saavedra sought help from the manager, telling him that “there’s a man saying he’s a lady in the ladies bathroom.”

It was at this point she decided it would be a good idea to document the bizarre occurrence by filming it so as to reveal to the public the fact that men are taking advantage of the socially deviant attitudes towards sexuality in California.

When the man reentered the dining hall, it was revealed he was a fairly young individual in a dark pullover with the hoodie pulled over his head.  Denny’s employees told Saavedra they saw drugs in his possession.  It is common in the Los Angeles region for people to go into public bathrooms late at night to satisfy their drug habit.

He accused her of invading his privacy, she shot back that he was invading hers.  “Next time use the men’s room.”

She later commented on her video that “this is what is happening in California.  They allow a man who thinks he’s a lady to go in the ladies’ room and put in danger the family…this is insane.”

Was Saavedra ever in danger?  She thought she might be.  She admits on the video that she had her pepper spray ready.

Transgenderism is one of the elements of the liberal left’s strategy to reshape America’s thinking.  Cultural Marxism is a strategy designed to dismantle the West’s ability to defend itself by eradicating morality, and exterminating the virtuous principles that have made the United States, and western civilization, flourish.  In the end, it is simply a politically motivated lie.

A critical battleground in the ideological war currently being waged, to fundamentally transform society the left believes our value system must be destroyed.  The goal is to undermine the character of our men so that they will lose the will to fight and defend the values that have made modern Western Society so successful and prosperous.  By deconstructing the very notion of masculinity, the aim is to gradually subvert the intellectual and moral traditions of western civilization, and to dismantle our system of liberty and traditional values in the process.

Radical feminism serves as an important element in the assault on masculinity.  What has emerged from feminism is an aim to “bring down the white capitalism patriarchy.”  To accomplish that goal, feminists and cultural Marxists target traditional relationships, and the family unit.  The strategy is to destroy the male-female binary, considered by the statists to be an artificial social construct designed to keep in place power over society by men.

Gender is arbitrary, the leftists claim, sounding much like the faceless dictators of dystopian science fiction novels where the faceless pawns of society are nothing more than numbers, and mindless obedient gray figures with shaved heads and no will to fight back.  To resolve the problem of liberty, and to neutralize the men who would be willing to fight to defend it, the leftists are working to drive a wedge between the sexes as they undermine the family. With masculinity deconstructed, and men convinced that their inherent masculinity is “toxic,” they can be broken down, feminized, and made harmless against the ploy of destroying our “capitalistic society.”

A subculture of men is emerging who have come to believe that their masculinity is to blame for every societal ill, from domestic violence to environmental catastrophes.  At early ages little boys are taught that their typical male behavior and rambunctious energy is problematic and toxic, and they must be drugged in order to fit into their societal place.  If not caught early, we have been convinced, such male aggression turns into gun violence, and male aggression that is the source of woe to our allegedly evolving progressive utopia.  Today’s young men no longer see any benefit to getting married, settling down and having children.  They would rather roam aimlessly alone, with drugs in hand and a hoodie over their head, seated on a toilet in a women’s bathroom, lashing out if anyone dares to question the lack of sensibility regarding their abandonment of any moral compass.

Islam is excited about that phenomenon, voicing often that to defeat the West all they have to do is outbreed us.

Islam is but one example of the reality we face.  The world is filled with factions who don’t like to play nice, and if they sense weakness, they will pounce.  Sometimes, male aggression through masculinity is the necessary tool on our tool belt to resolve conflicts, be it a schoolyard bully, a rampaging dictator flattening his neighbors with war machines, or an Islamic fundamentalist willing to do all he can to take out as many infidels as possible.

George Washington said, “To be prepared for war is one of the most effective means of preserving peace.”

But to wage war against evil, our men must be willing to do so.

As our young men lose touch with who they are, and what their responsibilities as a man should be, they are also losing touch with how to defend their homes, and their homeland.  A society who is unwilling to defend or protect itself against evil because the men would rather abandon their masculine roles as they writhe around in confusion about what gender they are, and do drugs in the dark corner of a women’s bathroom, is a society that is ripe for conquest.  In Europe the loss of masculinity has become so severe that the men in Europe, rather than defend their women from the emerging Muslim rape culture, are cowering behind their fears, and are instead recommending that women dress more modestly, live their public lives in large groups, carry rape whistles, or urinate on the rapists in the hopes that the act will make the attackers lose their sexual mood and no longer wish to rape them.  In the Netherlands many men marched wearing mini-skirts to show their solidarity with women.

Yeah, that’ll strike fear into the hearts of the rapists.

Giving in to the attack on masculinity is a signal of submission.  Jazmina Saavedra should be thanked for pointing out the symptoms of societal suicide.

Instead, our feminized men are attacking Saavedra for exposing the madness.

These pansies not willing to defend our wives, daughters, sisters and mothers against a well-planned assault that is designed to destroy us from within because they are a part of the problem.  If we are going to spend our time betraying the masculinity of our men with a silly war over pronouns (he versus she), then our men will be unwilling and unable to defend our culture against the tyrants lurking and waiting for the right time to strike.  There is a clear biological reality that a human being is born either male or female, and it is the males who must defend our society culturally, physically, and spiritually.  Otherwise, the war is lost, and the girly-boys will be nothing more than whimpering targets serving as easy targets for an aggressive enemy to pick off, one by one.

Jazmina Saavedra provided a service to our American culture by being willing to expose the madness of transgenderism as it fluttered and snorted in a bathroom stall.  Yet, rather than recognize the true mental sickness of it all, the liberal left would rather attack her as being someone who is discriminatory and not fit for office.

The reason we are in this cultural mess is because of a government full of leftist individuals not fit for office.  Someone like Jazmina Saavedra is not the problem in politics, candidates like her are the solution.  For society’s sake, we don’t need to be throwing in the towel on this issue.  Christian Conservatives must be willing to fight for preserving our social order.  We must continue to end the idiotic idea that people should amputate healthy sex organs in a quest to manipulate their body into something biologically it is not.  We must not concede to the idea that being a man is toxic, and that what’s best for our culture’s psychological and spiritual health is for men to run out and don skirts, cry and whimper during chick flicks, and do nothing but prance around upset because somebody didn’t like him in the ladies’ bathroom.  Transgenderism is a mental health issue, not a civil rights issue, and the sooner we begin to recognize that, the sooner we can do what we can to stop the growing assault against our civilization by cultural Marxism, and save our constitutional republic from forces that are determined to strangle her with a pair of non-gender skinny jeans.