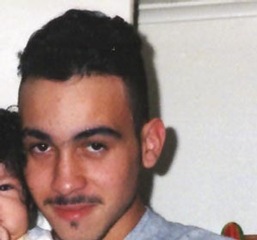 Azael Ismael Vasquez, 21, of New York, NY, died Sept. 11, 2001, a victim of the coordinated terrorist attacks against the United States on the World Trade Center in New York City, the Pentagon, Washington DC, and elsewhere.

He was a food service handler for Forte Food Service simply performing his duties in one of the towers when the cowardly acts of terrorism commenced.

An article in the New York Daily News indicated that the funeral for Azael Vasquez was held on January 19, 2002, four months after the attacks, because of the unfortunate difficulty in locating his remains. Vasquez's father has said that he hasn't been able to return to his son's grave since the funeral.

Azael Ismael Vasquez, we will all remember you, and your fellow victims, forever. This tribute is posted for the fifth anniversary of the terrorist attacks on the United States of America, September 11, 2001.

We shall never forget.

Indeed we will never forget. Azael, I remember you too buddy, rest in peace.

Wonderful Tribute!
Thank you.
These are sad and hard to read....
I am honored to be a part of this project.
Mine is posted also...

The 2996 link is down. I have a new link on my site to view the participants.

I too was honored to take part. A very heartfelt tribute.

We will never forget one lost soul, murdered by Islamic terrorists.

I was going to delete the last post, but it was so entertainingly idiotic that I decided to keep it up. First of all, notice that the poster is anonymous, has no site to go to, and left no calling card. The leftist lie feels more comfortable hiding in the shadows, only striing when least expected, sort of like the cowardly Islamic Terrorists. Though entertaining, I have to admit that this comment is thought provoking in the least, but I will post an article challenging each point soon. Thanks you, Enlightenment, whoever you are, for proving to me that there really is people out there like Jerry Fletcher (Mel Gibson's character in "Conspiracy Theory") teetering on the edge of madness. If you look hard enough for things, they sometimes can exist. Once, while looking hard, I found no less than nine words in my bowl of alpha-bits. Perhaps the government is trying to send me a terrible message through my spoonfuls of cereal!

My beloved nephew. I never get you off my mind and heart. I love you and miss you, my dear son. Titi will always have YOU in her heart. Wowwwwww it still feels like this cowardly tragedy happened today. Nothing feels the same. Now you are in heaven with Grandma and Grandpa whom I miss dearly too. Until I see you all again. XOXOXOXO muahhh