Posted by Douglas V. Gibbs at 8:30 PM No comments:

The Real Story of Thanksgiving 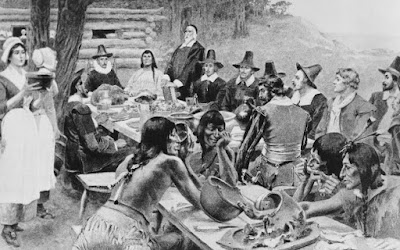 ... as told by Rush Limbaugh

I know little about the inner workings of local politics within the City of Banning, Ca. However, the recent petition to recall District 4 Councilman David Happe has a common whiff of politics in general.

I have had a couple of conversations of a political nature with Mr. Happe. These were reasonable, two way discussions on his part, not the normal bob and weave, change the subject to shape a shout down narrative that so often characterizes political conversation.

There is a varying degree of “whats in it for me” in politics of any type. Stalin and Hitler couldn’t have done what they did without rewards for those who supported them. The same is true for any morally upright politician who would even think about being a success. In nearly all aspects of life there is a never ending negotiation of quid pro quo, some unsaid yet expected, some far more acceptable than others. On one hand, this works towards an orderly and cooperative society, on the other whatever is “fair” can go out the window when one self interested party has an advantage over the self interested other. It is never good when one side can be all take and no give and especially when vindictiveness or sociopathy is a factor.

Money, sex and power are said to be the prime motivations for murder. There are plenty of those motivators in all aspects of the politics of competing self interest.

Perhaps newcomer Mr Happe represents a perceived threat to those who benefit from the status quo and those stepped on toes lashed back with an apparently slanderous recall effort.

Politics in general can be a nasty business. Epic power struggles; inventive, vicious slander that goes far beyond the immediate participants; half the observers trashing the other half and sometimes anyone and everyone else not present.

Mr. Happe commented in part that to have a recall for anything other than criminal activity is a waste of time, that just because your taxes are going up or your candidate didn’t win is no reason to have a recall of the governor or impeachment of the president. Mr. Happe is looking at this through the lens of his own political experience.

Governor Gray Davis was a participating factor of exploding retail energy costs and further raising the cost of living. if I remember right what broke the camel’s back was raising the vehicle license fee and the recall was on. It was a broad spectrum of “what’s in it for me” that booted Davis out of Sacramento.

Governor Newsom is presiding over what I perceive to be an all out assault on the middle class with taxes and living costs soaring out of sight due to Sacramento’s one party, ideological agenda. If the split tax role effort succeeds and cap and trade inflates energy prices next year Mr. Happe may well be squealing like a stuck hog because the property tax he pays, directly through ownership or indirectly through the landlord, is going to rise to stratospheric levels, his wholesale costs will go way up, his employees may want a raise to cope with the increased cost of living, and his customers are going to have less disposable income to spend in his restaurant while Mr Happe may need to raise prices to cover his costs. There is a lot of “what’s in it for me” for Mr. Happe’s constituency, his business, his employees, his customers and Mr. Happe himself.

Newson would be removed from office for those reasons by the same direct democracy voters that put him in office.

On the other hand, if during his candidacy for councilman Mr. Happe’s electoral opponent had conspired with key unelected members of city hall to trash him to the public by buying and leaking invented fourth party fantasy, then those same elements of city hall and elected political opponents worked on nothing but his removal from office the second he was elected and, while conducting a conviction in search of a crime to prosecute, kept a grand jury occupied for years with all sorts of hearsay snipe hunting to run him out of office without seeking the unpolarized consensus of both the elected body and the constituency at large. And, while in the process of manufacturing a case for removal the accusers did all the very same things they accused him of, then Mr. Happe might have a point about recalls being a universal waste of time.


-- Political Pistachio Conservative News and Commentary
Posted by Douglas V. Gibbs at 2:42 AM No comments:

After last Thursday Night Football's violent ending where a Brown's defender, Myles Garret, pulled the helmet off of the Steelers' quarterbacks' head and then used the piece of equipment as a weapon to strike the QB in the head with the helmet, I immediately recognized the anger and violence as being a sign of the times.  Why has society gotten so violent?  Did the Founding Fathers see this coming?  Is violence addressed by the U.S. Constitution or in the writings of the Framers?

Posted by Douglas V. Gibbs at 2:11 PM No comments:


-- Political Pistachio Conservative News and Commentary
Posted by Douglas V. Gibbs at 12:05 AM No comments:

Incestuous Nepotism of the Liberal Left in Politics, and the Media

Email of the Week:
> YES, the CA governor, GAVIN NEWSOME IS NANCY PELOSI'S NEPHEW,
> AND YES, ADAM SHIFF'S SISTER IS MARRIED TO GEORGE SOROS’ SON, AND YES, JOHN KERRY'S DAUGHTER IS MARRIED TO A "MULLAH'S SON IN IRAN................
>
> This is what you call a "stacked deck."
>
> IF YOU HAD A HUNCH THE NEWS SYSTEM WAS SOMEWHAT RIGGED AND YOU COULDN'T PUT YOUR FINGER ON IT, THIS MIGHT HELP YOU SOLVE THE PUZZLE :
>
> ABC  News  executive producer Ian Cameron is married to Susan Rice,  Obama's former National Security Adviser.
>
> CBS  President David Rhodes  is the brother of Ben Rhodes, Obama's Deputy National Security Adviser for Strategic Communications.
>
> ABC  News correspondent Claire Shipman is married to former Obama White House Press Secretary Jay Carney  .
>
> ABC  News and Univision reporter Matthew Jaffe is married to Katie Hogan, Obama's former Deputy Press Secretary.
>
> ABC  President Ben Sherwood is the brother of Obama's former Special Adviser Elizabeth Sherwood.
>
> CNN  President Virginia Moseley is married to former Hillary Clinton's Deputy Secretary Tom Nides  .
>
> This is “Huge” and is a 'partial' list since the same incestuous relationship holds true for NBC/MSNBC and most media outlets. Trump has been right all along. Fake News is generated by this incestuous relationship.
>
> Ya think there might be a little bias in the news?..... Dah!