Prayer for those in the crossfire 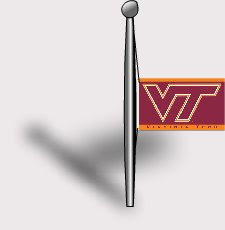 I spent most of my day yesterday behind the wheel of a big rig transporting equipment between Orange County, San Bernardino County, and Riverside County in Southern California. When days like this come up where I spend most of my day driving, it enables me to spend a lot of time listening to the radio. I was shocked at the events developing at Virginia Tech in Blacksburg, Virginia.

A gunman went on a rampage, reportedly killing 32 plus himself, and injuring twenty plus, in the most horrific and worst mass killing in the history of the United States. This campus shooting began, authorities believe, with a killing of two in a dormatory, and then two hours later, equipped with a 9mm and .22 caliber weapon, and a jacket of clips, the gunman went from class to class at Norris Hall killing at will.

On Michelle Malkin's site, an e-mail from a student at Virginia Tech that had been trapped in one of the classrooms, baracaded as the shooter fires shots through the door they blocked only seconds before, gives a chilling first-hand account of the events.

I have no opinion on yesterday's events other than that they are chilling, and that thoughts of my wife who goes to a local university in pursuit of her bachelors degree, and my children who are roughly the same age as the students at Virginia Tech, came to mind. My prayers go out to those slain, to the parents of those gunned down, and to the students who survived, but will be affected by this for the rest of their lives.

Pray with me for their healing.

this post has been cross-posted at all of my sites.
Posted by Douglas V. Gibbs at 12:42 AM

This is such a sad thing... It breaks my heart. All of the victims, their families and friends are in my thoughts and prayers....