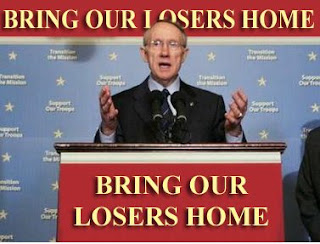 A few hours ago the House of Representatives voted to withdrawal U.S. troops from Iraq by Spring of 2008. The measure passed 223-201. Democrats and the anti-war crowd does not agree with President Bush, or the Conservative Right, that we can succeed in Iraq.

One of my main concerns is regarding the message this sends the enemy, and our allies. Dick Morris actually did a piece saying that it would be wise for Bush to concede, and begin a troop withdrawal. I disagree. Political motives are not a good reason for doing the wrong thing. Ahamdinejad in Iran has been waiting for this. Fact is, Iran is bent on Israel's Destruction, along with the demise of The West, and this is exactly what he disires from us. Pulling out will invite terrorists to come to America and hit us (Al Qaeda has already regrouped and is ready for another strike), places Israel in greater jeopardy, and betrays those in Iraq that believed in us and our presence. That bitterness, caused by us abandoning these people, will create a hatred that Iran and Syria will feed upon, and Iraq will once again become a haven for terrorists. And a pullout will also place doubt in our ally's minds regarding us.

And all of this is going on as Pakistan falls under more attacks from Al Qaeda (remember, Pakistan has nuclear weapons), and Islamic militants kill 14 Philippine marines, beheading ten of them.

As this is going on, the Left desires to appease the enemy, underestimating the seriousness of the War on Terror. The MSM is content to focus on deathtolls in Iraq (rather than mentioning what good has been going on there such as the advances of most of the provinces toward self-protection, and the humanitarian efforts by American Troops such as immunizations of children, and the like.

Here's my grave concern about all this. It's not just that I see this as a dangerous mistake on our part. I see Islamism as a force determined to destroy the United States. Whether or not they can is not the point. The fact that they wish to is not something we should shrug off.

But it all goes deeper than that. I fear the very existance of the United States of America as being in grave danger. Not only do the Islamic Extremists wish to end our existance, but so does the Mexican extremists (and the movement is stronger than you realize), socialists in the Democratic Party, and the Internationalists in the Republican Party. Once, long ago, it was the communists from Russia. Now it's those groups above, as well as China, North Korea, and the like.

So I ask this question: Do we really wish to take the threat of ending American sovereignty lightly? Should we truly underestimate the possibility?
Posted by Douglas V. Gibbs at 8:24 PM