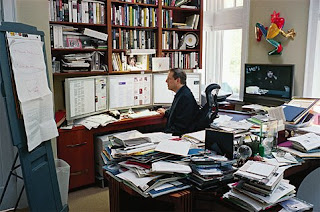 Former Vice President Al Gore, the guru of the Global Warming Lies, has decided that big corporations are paying for research that creates propaganda to dispute the "scientific consensus."

What consensus? Junk science agreed upon by a bunch of liberals and Hollyweird celebrities does not make it a consensus.

Let's take Roy Spencer, for example. Roy Spencer is the Principal Research Scientist at the University of Alabama. He was also the recipient of NASA's medal for Exceptional Scientific Achievement and the American Meteorological Society's Special Award for his satellite based temperature monitoring work. And he has come to the conclusion that Global Warming being manmade is an irresponsible position to be taking - as well as assuming that something like Katrina may have been caused by man's "carbon footprint." Listen to an interview of him at Nathan's Blog.

Okay, so apparently all scientists do not agree with Mr. Gore - Roy Spencer is one such example out of many.

"But, gosh," the liberal may say, "the horrendous weather patterns are proof enough!"

Mr. Gore has stated that Global Warming is the cause of an increase in hurricanes.

Hurricane season began June 1 of this year, and, well, where's the hurricanes? How many have we had in this horribly desperate season of hurricanes caused by Global Warming?

Now the global warming crowd is so confused over the inconsistency of their data that they don't know what to do!

Besides, the environment is the least of our concerns, anyway, and most folks know it. Why? Because despite what the Left is preaching, people realize that there will be no extreme impact of Global Warming in the next 50 years because man-made Global Warming does not exist. Climate temperature changes are a natural occurrence. It is now cooler than it was during Jesus' days, and cooler than when the Vikings visited Greenland back hundreds of years ago (long before SUV's, and check this out - Greenland was "Green"!).

Don't get me wrong, however. If I thought that for one minute the EPA and Gore was genuinely correct, and doing what they claim to be doing, I'd support them with everything. I do believe we should be good stewards of the planet. But what it comes down to is money and political agenda. The EPA, for example, is an agency seeking to expand its environmental extremism and broad regulatory powers while selectively ignoring science fact, and is working with left-wing groups more bent on the destruction of capitalism than on the protection of the environment.

For example, based on the rantings and ravings of Rachel Carlson claiming that DDT, an insecticide, needed to be banned because of this harmful effect and that harmful effect (primarily, she said it was carcinogenic), DDT was banned in the United States in 1972. In 1970 the National Academy of Sciences stated that "To only a few chemicals does man owe as great a debt as to DDT. In little than two decades, DDT has prevented 500 million human deaths, due to malaria."

In 2006 the United Nations World Health Organization gave DDT a "clean bill of health." Due to Carson's lack of research, millions have died from malaria. Her hysteria about the evils of DDT has killed people, just as the hysteria about Global Warming is lining the pockets of the new reverends of the Global Warming Church with plenty of cash.

The EPA has a history of wiping out whole industries and banning products on the basis of bad science and we haven't learned our lesson yet.

Al Gore is attempting to create a regulatory juggernaut fueled by his flawed science and socialistic agenda. There is no scientific consensus. The environmentalists, with their untruthful strategies, have convinced the Left of lies, and they have fallen for it hook, line and sinker. Hundreds of thousands have died in the past because of the EPA's stupidity, and now more may die, and billions of dollars lost, because of the Global Warming crowd's stupidity.

And none of their dire predictions are coming true - though anytime something does happen, they sure are quick to blame it on Global Warming.

Also see my post at MyPoint on American Troops hitting Sadr City in Baghdad; and the story of a business man fighting illegal immigration at American Pundit.
Posted by Douglas V. Gibbs at 11:11 PM