Love for a Lifetime 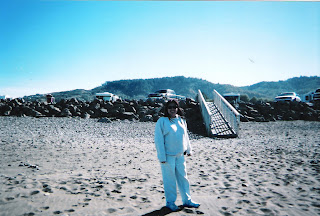 Yesterday Mrs. Pistachio and I celebrated our 23rd Wedding Anniversary. Hence, I haven't posted in a couple days. Twenty-three years. Some say it's an accomplishment. Others say we are members of a rare breed in today's society. Trust me, it wasn't easy in the beginning.
We met in high school at a Halloween Party in 1982. She was dressed as a cheerleader and I went as Alfalfa (Little Rascals/Our Gang character) complete with the stem of hair pointing skyward at the crown and clothes reminicent of that era a size too small to add for effect. We danced all night in the den of the house the party was held in to Endless Love by Lionel Ritchie and Diana Ross (some would say the dance was endless).
We experienced our first kiss that night as we parted ways. It happened on the front walkway only paces away from my mom's waiting car, with mom at the wheel. The kiss was electric.
The following Monday I asked her if she wished to go out with me. She said no.
My heart was crushed. I was dizzy with pain. Love claimed yet another hapless victim. And the reason for her denial of love was unexpected. Her decision was based on the fact that she was a senior, and I was a junior. No self-respecting high school senior would ever allow themselves to be seen dating anyone of a lower grade.
Less than a year later after she graduated we began dating regularly. A year after that we were married and I was off to bootcamp in the United States Navy. Christopher, our firstborn, is our honeymoon baby, born April of 1985, nearly nine months after our marriage. On July 1, 1985 I incured a left temporal fracture that nearly left me dead. My faith and her faith did not see eye to eye. And our youth posed it's own problems with its preoccupation of selfishness. Marriage became a difficult task to say the least.
At the start of our marriage we had no idea on what to do, or what was to come. But as we faced the storms of life we grew together, and became each other's best friends. Our love grew stronger. Our marriage strengthened. Our love deepened.
The road was not simple. Our life together was plagued with twists and turns, ups and downs. We faced blessings and challenges, laughter and tears. Finally, we realized that our marriage is not about her or me, but about us, and the plans God has prepared for us. And in the end, with all of the obstacles behind us, we realized that we had ventured the journey together.
I Corinthians 13:13 "And now these three remain: faith, hope and love. But the greatest is Love."
continued from Ox. . . after Dark
Posted by Douglas V. Gibbs at 7:13 PM