Rudy's part in the Search for a Red November 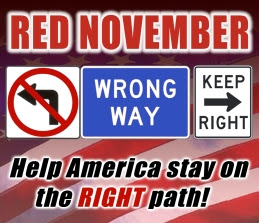 Red November is more than a blogroll, it is a hope for the future. Every election conservatives get together and decide that the upcoming vote will be a defining decision for our nation. Truly, every election defines this nation, and sends our political environment into a new direction. This is what is so great about freedom. This is why I love my country so much. We have a choice.

Last Sunday night, as I listened to Andrea Shea King on a live stream from WBDO AM 580, in the chat room a discussion about Rudy Giuliani broke out. 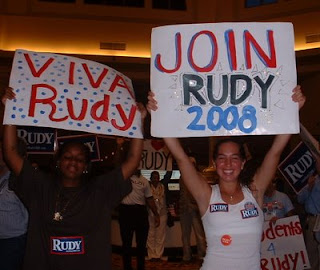 Many of the commenters determined, as I have, that Giuliani is no more than a Liberal dressed up in an elephant's costume. His policies in New York when he was mayor shadow those programs and actions that Hillary Clinton proclaims she desires to put into place once she gains royal control of our fine nation. In the eyes of those commenters in Andrea Shea King's chat room, aside from his willingness to continue to fight the war on terror, Rudy Giuliani is just as dangerous, and perhaps more dangerous, than Hillary Clinton, should he find his way into the White House.

Hillary Clinton, at least, with her social programs and Marxist ideas, would be in check constantly by the Republicans in Congress and the world of Conservative Talk Radio. Every move she could possibly make would be scrutinized, and through hosts like Rush Limbaugh, Glenn Beck, Dr. Michael Savage, and writers like Michelle Malkin and Ann Coulter, and so on and so on, she would be checked every step of the way, and the public would be made aware of her idiotic moves as President of the United States every step of the way.

Rudy Giuliani, however, with his history as mayor of the city struck by terrorists on 9/11, has become America's darling. People view him as a viable consolation prize when compared to the crazy liberal leftiness of the new Socialist Democratic Party. "He understands the need for the battle against the terrorists," people proclaim. "Who cares if he is liberal in every other way?" "What good are those issues if there is no America remaining because we live under Sharia Law?"

Each argument is a good one. I agree that whether or not we are a nation that aborts our unborn children, or mercifully gives them the chance for life; or whether or not we welcome same sex marriages into our Christian Institution of Marriage, will not matter a single bit if we abandon the war on terror, and allow ourselves to be swallowed up by Islamo-fascism. The fact that Rudy Giuliani desires to remain in the war, and to fight the world of terror with every last ounce of strength is an advantage - but is it the only advantage? And are those other issues, the social issues which define us as a moral society, something we are willing to compromise? 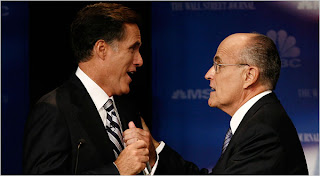 What about Mitt Romney? Is his history of flip-flops and the fact that he is a Mormon too much for the Conservative Voter? What about his hard stance against Hillary? What about what he has said in the debates? 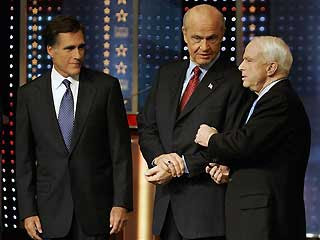 Has John McCain's maverick attitude damaged his chance too much, despite the fact that he is a war hero and quite conservative until campaign contributions or the illegal alien issue arises? After all, McCain has picked up the endorsement of Senator Sam Brownback, a Kansas conservative, and favorite of many evangelical Christians, who recently withdrew from the field of GOP candidates. What about Mike Huckabee, minister and governor with great conservative values, a message of faith - family - freedom, though a record that befuddles most? After all, he's intent on outlawing the IRS and instituting The Fair Tax. 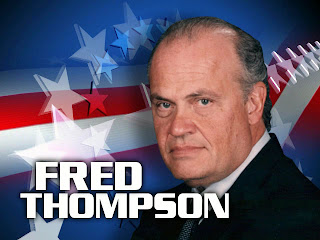 And what about the actor, Fred Thompson? Is he seasoned enough? Is he truly conservative? Is what he says in sync with his past voting record as Senator? Does the fact that he is a member of the Council on Foreign Relations bother the voter? And of course, there is Duncan Hunter, the best candidate with the least chance. Can he pull it off? Is his values enough to catapult him suddenly into the race again? Would Hunter, or any of the other candidates in this paragraph, stand a chance against Her Royal Pantsuit?

Then there is the Libertarian that thinks he is a Republican. What about him? What about Ron Paul and this rabid Ron Paul Revolution? His followers are ardent, able to create a day for the record books recently by raising $4.2 million in one day (local election day). Why have so many people invested so much in Ron Paul? He's against remaining in the Middle East, desiring to pull out of all of the theaters, and then there is his position of legalizing Marijuana. However, despite all of that money in one day, only so many times can the same 35,000 people contribute, and Ron Paul is not finding new followers to be added to his lump of supporters because The Right recognizes the importance of the Global War on Terror, and The Left is scared to death of his pro-life, pro-gun, anti-courts attitude.

Which brings us back to Rudy Giuliani. Despite his positions on supporting abortion and gay activities in the public forum, is he an acceptable choice as the GOP nominee?

Pat Robertson, a member of the old school Fundamental Christian Coalition, has decided that Rudy Giuliani is fine as a candidate for people of faith. Pat Robertson recently said, "I thought it was important for me to make it clear that Rudy Giuliani is more than acceptable to people of faith. . . some on the fringe of the social conservative movement may see Giuliani as an unacceptable nominee, but the core know better. . . those disagreements pale into insignificance when measured against the import of the fight against global terrorism and radical Islam. We need a man who sees clearly how to deal with that issue."

Though I am quick to point out that Pat Robertson and his 700 Club may not be a representative voice of Christians any more than Bush may or may not be of conservatives, I wonder if the "compromise" regarding Giuliani's stance on social issues is worth it, as Robertson points out.

After all, just having the label of "Republican" will give Rudy a lot of passes on Liberal activities and attitudes.

I guess I am asking this: Should we, as conservatives, look the other way regarding his social beliefs just so that we can keep a Republican in office, and a Marxist like Hillary Rodham Clinton out of the White House? And if Rudy did get into office, would he be more dangerous because his liberal activities would be unchecked based upon who he is, unlike Hillary, who would be scrutinized every step of the way?

And for a little added news, Mrs. Pistachio and I are celebrating the birth of our first grandchild. The song dedication to him is on Carried By Christ.
Posted by Douglas V. Gibbs at 7:52 AM