Be My Little Teddy Bear 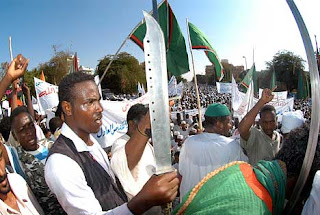 For those that are crazy enough to actually believe that Islam is a Religion of Peace, I would like to present yet another example of why Islam is not only not peaceful, but contains a membership of absolutely crazy, fanatical and violent barbarians.

Gillian Gibbons is a British teacher that was jailed for 15 days in Sudan because she allowed her pupils to name a teddy bear Muhammed. Apparently, that was an insult to Islam, and the penalty for insulting Islam is the demand by protestors for you to be beheaded.

Protestors reportedly streamed out of mosques shouting, “Kill her, kill her, kill her by firing squad.” Many of these protestors brandished giant swords, axes, clubs, and knives. Pictures of Mrs. Gibbons were set afire or stomped on in the dirt.

One chant yelled was, “No one lives who insults the prophet.”

Could you imagine the backlash if Christians took to the streets and waved objects of battle demanding death to anyone who insults the image of Christ? There are daily assaults on Christianity, and nobody fears doing so, yet we are supposed to believe that Islam is a Religion of Peace with this kind of response over a Teddy Bear being named Muhammad?

Interestingly, the 15 day jail sentence is light. Such an insult to Islam is normally met with 40 lashes, six months in prison and a fine.

And what really gets me is that the British are calling it an innocent mistake. Mistake? Who cares? So a Teddy Bear was named after their Muhammad. Get over it. This woman went into Sudan with the intention to help Sudanese kids. Think about it. Why would she go into your country with the intention to cause trouble?

Islam, here, has just proven once again that it is a backward, violent ideology, and cannot be trusted.
Posted by Douglas V. Gibbs at 3:33 AM