Columbia University Once Again Makes Me Scratch My Head In Disbelief 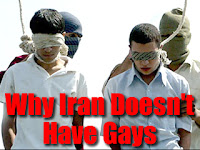 At the end of the above linked article, it states, "Bollinger has so far refused to meet the Mehr News Agency correspondent to explain his disrespectful behavior toward Ahamdinejad when introducing him to the students and professors at Columbia."

If you remember, Columbia University President Lee C. Bollinger was being simply honest when introducing Ahmadinejad as a "petty and cruel dictator," and questioned the Iranian leader's record on human rights and his statements that the Holocaust was a myth. The moderator (John H. Coatsworth), during the question and answer period, also accused Ahmadinejad of avoiding questions about Israel and Iran's treatment of women and gays.

I wonder if these same professors, that are so offended by the Iranian President being called a petty and cruel dictator, have any problems with the ongoing verbal onslaught of much worse name calling by Americans against President Bush and our fine men and women fighting overseas? And what about Ahmadinejad's behavior towards Christians, Jews, Non-Muslims, women, gays, and cartoonists? Do those professors have a problem against that?

The only thing this action by the professors will accomplish is to confirm to the enemy that we are weak, quick to rip out our spines, and expose our underbelly. The Islamic Jihad will not see this as anything other than weakness. And it is a mistake to show these people any sign of weakness. Signs of weakness to the Islamic Jihad costs precious lives.

This isn't surprising, though, if you think about it. Lefties have a tendency to appease the enemy. It was true in 1938 and 1968, and it is true in 2008. The only difference is their willingness to be so blatant about it.

Now, my daughter is preparing for college, and when I see members of Columbia University's faculty visiting the fascist, genocidal dictator of Iran in order to apologize for Dr. Bollinger's introduction of him when he spoke last September, I think to myself that the fascist of Iran needs no apologies. He really needs a bullet in the head.

Needless to say, my daughter will not be applying to Columbia University.
Posted by Douglas V. Gibbs at 11:20 PM