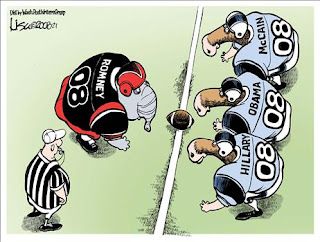 California Governor Arnold Schwarzenegger is not nearly the liberal that his predecessor, Gray Davis, was. . . but Ahhnold is no Conservative Republican, either. Knowing that, it is no surprise the former actor (not that he was the greatest actor) turned politician (not that he's the greatest politician either) has decided to back "Republican in Name Only" John McCain. What is even more interesting about that is his wife, Maria Shriver, who is a member of the powerful Kennedy political clan, endorsed Barack Obama for U.S. President on Sunday.

Obama is hardly the best man for America. He is a racist who pledges his allegiance to Africa before America, refuses to give the flag proper respect during the Pledge of Allegiance by placing his hand over his heart, and has ties to Islam.

The Clinton Crime Family, another powerful liberal political clan, is the Liberal Elitists I most worry about, however. Hillary Clinton has proven time and time again that she is willing to stoop to all levels to win this presidency - From shedding plastic tears to launching vicious attacks, nothing can hold her back. . . but is character assassination and blackmail beyond her and her hubby, Bill?

This article is taken from Andrea Shea King's site, The Radio Patriot, and after reading it, if you think this is shocking, Dr. Jack Wheeler is also her guest tonight on Blog Talk Radio!


SPOOKS FROM THE PAST


Dr. Jack Wheeler's piece about John MCCain has stirred up quite a bit of controversy. Wheeler will join us MONDAY night to talk about his claim that the CIA is holding information that could sink McCain's bid for the presidency. Show program details are at THIRDWAVEDAVE'S.


I subscribe to Jack Wheeler's "To The Point News". Jack is a Washington insider -- deep inside. I've interviewed him on my radio programs several times and posted about him here as well.

In his most recent post, Jack reveals some extraordinary, never before published and shocking information about Sen. John McCain the War Hero and President Bill Clinton. I've reprinted it for you here:

The number of fellow Senators who think John McCain is psychologically unstable is large. Some will admit it publicly, like Thad Cochran who says, "The thought of his being president sends a cold chill down my spine."

Others relate times when McCain screamed four-letter obscenities right in their faces in the Senate cloak room, like Dick Shelby, Rick Santorum, or Jim Inhofe. "The man is unhinged," one Senator told me. "He is frighteningly unfit to be Commander-in-Chief."

That John McCain is clinically nuts is scary enough. What worries a small group of GOP Senators and Congressmen even more is a deep and dark skeletal secret in McCain's glorified past to which they are privy, and which the Clintons will use to blackmail him.

They have been having discussions with a Russian whom we'll call "T" for Translator. T's father was the Soviet military intelligence officer who ran the "Hanoi Hilton" prison holding captured Americans during the Vietnam War. One of those prisoners was John McCain.

The GRU -- Glavnoje Razvedyvatel'noje Upravlenije or Main Intelligence Directorate of the Soviet (now Russian) Armed Forces - operated the entire North Vietnamese prison system holding American prisoners of war. GRU officers, all of whom were Russians, oversaw the interrogation of every American POW.

The interrogations themselves were conducted by Vietnamese who spoke some English. After each interrogation session, which could often include torturing the prisoners at the direction of the GRU officers, the Vietnamese interrogator would write a report of the session - in Vietnamese.

These reports had to be translated into Russian. T, a bright teenager living in the GRU compound in Hanoi, had become fluent in Vietnamese, and ended up translating many of the reports and interrogators' notes.

John McCain, flying his A-4 Skyhawk, was shot down over Hanoi on October 26, 1967. Badly injured from the ejection, he was beaten and abused by his captors. In July, 1968, his father, US Navy Admiral J. S. McCain, was made CINCPAC, Commander-in-Chief, Pacific Command, commander of all US military forces in the Vietnam theatre. Upon learning this, the Vietnamese offered - according to McCain - to release him.

McCain claims he refused, because he demanded all American POWs captured before him be released as well. He thus remained a prisoner when he could have gone home, and was subjected to constant brutal beatings and torture for years: that is the source of the "war-hero" saga making McCain a greater war-hero than any other American POW.

Yet the offer of release would had to have been approved by the GRU overseers of the North Vietnamese - and T does not recall any such offer being made. T admits, however, that this took place before McCain was transferred to Hoa Loa prison, nicknamed the "Hanoi Hilton" by the POWs. T had only direct knowledge of what happened at Hoa Loa, and not the other prisons, where T's father was in charge.

McCain was kept at the Hanoi Hilton from December 1969 until his release, along with all the remaining POWs, in March of 1973. During this time, T translated all the Vietnamese interrogators' notes and reports regarding John McCain.

According to T, they reveal that McCain had made an "accommodation" with his captors, and in exchange, T's father saw that he was provided with an apartment in Hanoi and the services of two prostitutes. Upon returning to his prison cell, he would say he had been held in solitary confinement. That may be why so many of his fellow prisoners said later they saw so little of him at Hoa Loa.

The notes and reports written in Vietnamese were sent to Moscow, where T was a now a college student, for T's translation into Russian, then placed into GRU archives. That's where they stayed until 1991. Late that year, as the Soviet Union was collapsing, the CIA and the GRU made a deal for a document swap.

All of what it involved, T doesn't know. What T's father, by now retired but still with substantial contacts within the GRU, did learn (and thus T learned) was that the swap included all of T's translations.

In other words, the CIA has in its possession the notes and reports of John McCain's interrogators at the Hanoi Hilton, in both the original Vietnamese and translated Russian, showing collaboration with his Communist captors.

Allegations of this nature have been made over the years, many by Vietnam veterans. There is an even an organization, Vietnam Veterans Against McCain. But they are based on suspicions and circumstantial claims. There has never been any hard direct evidence.

What T says the CIA has is such evidence. Its release would destroy McCain. The threat of its release could force McCain to take a fall, blow the election and lose on purpose. And just who do you suppose would know what the CIA has and work with them to release it?

Someone who has been a CIA asset since he was recruited by London station chief Cord Meyer while a student at Oxford in 1968?

(Back in the 90s years after he retired, if Cord drank a little too much Scotch, he would laugh derisively at those conspiratorialists who accused Bill Clinton of being connected with the KGB.

"They all darkly point to Bill's participation in anti-war peace conferences in Stockholm and Oslo, and his trip to Leningrad, Moscow, and Prague while he was at Oxford. ‘Who could have paid for this?', they ask. ‘It had to be the KGB!' they claim." Cord would shake his head. "What rot - we paid for it. We recruited Bill the first week he was at Oxford. Bill's been an asset of The Three Bad Words ever since." Cord passed on in 2001.)

The small group of Senators and Congressmen who have been briefed by T have been unable to confirm with the CIA any details of its document swap with the GRU beyond an admission that such a swap "may have happened." They are very nervous about pursuing the matter any further.

The Clintons are not nervous. They are utterly ruthless, and have buddies at Langley all too happy to help them.

It has been noted many times here in To The Point that while most folks think the CIA is a right-wing outfit, it is not. The CIA has been dominated by left-wing hyper-liberals for years.

The CIA is a left-wing, liberal outfit, and its main job for some time now is not attacking America's enemies but conservatives in general and George W. Bush in particular. The story is best told by friend, Ken Timmerman in his new book Shadow Warriors.

When the time is right, the Clintons will see to the leaking of the GRU archives on McCain to the media. Bet on it, just as you can bet they'll follow it up with media disclosures of the lady lobbyists in Washington having adulterous affairs with McCain. (There are at least three of them; I know the name of one but I'm not going to put it in writing.)

Maybe McCain will try to fight back by confirming Hillary's well-known bisexuality and her lesbian affair with her beautiful assistant, Huma Abedin. Google "Hillary" and "Huma Abedin" and you'll get almost 6,000 hits. Turns out Huma is a Moslem who grew up in Saudi Arabia and is strongly suspected of working for Saudi intelligence.

Or maybe he'll capitulate to Clinton blackmail. You never can tell what a psychologically unstable guy will do.

And that last point is why - be prepared for this, folks - I would not in any circumstances vote for John McCain, not if either Hillary or Obama were the alternative. Evil is safer than crazy. Leftie amateur inexperience is safer than crazy. So I agree with Ann Coulter who says:

"I'd rather deal with President Hillary than with President McCain. With Hillary, we'll get the same ruinous liberal policies with none of the responsibility."

How in the world can the Republican Party get saddled with a nutcase whack-job who knows nothing about economics, is so anti-capitalist he uses "profit" as a term of derision, has never run a business or had any job outside of government, will raise taxes, is so stupid that he believes "stopping global warming" is worth destroying the American economy, won't drill ANWR, won't appoint strict constructionist justices, won't protect marriage, will give amnesty to 20 million illegal aliens, is beloved by the New York Times, and lives in a delusionary world of vanity and rage?

Rush is right. A McCain presidency will be the destruction of the Republican Party. It needs to be rebuilt, not wiped out with the field clear for the fascists of the left to consolidate power and eliminate freedom.

And maybe the only way to rebuild it is in dedicated impassioned opposition to a Clinton White House. That should be the subject of Ann Coulter's next book. I've already got the title for her. Her last book was If Democrats Had Any Brains, They'd Be Republicans.

Ann needs to now write this book: If Republicans Had Any Brains, They'd Be Republicans.

[A Yogi Berra note. There still is a chance for Romney, the last remaining hope. If he can win enough delegates on Super Tuesday next week, combined with Huckabee winning Georgia and other southern states, it may still be possible for McCain to end up with only a plurality of delegates, not a majority, at the end of primary season. An open convention is still possible, during which Republicans could come to their senses. It's not over until it's over.]
Posted by Douglas V. Gibbs at 3:12 PM