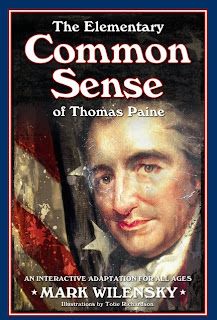 Mark Wilensky is a fifth grade teacher with a love for history. When he came across Thomas Paine's "Common Sense" he was surprised that he had never heard of the document before. After studying it, he realized that it was among the most important founding documents, and he decided to write a book about it.

The Elementary Common Sense of Thomas Paine by Mark Wilensky is an interactive guide through this influential pamphlet that conceptualized the idea of unity and freedom months before Thomas Jefferson put pen to parchment. Thomas Paine, in his Common Sense Pamphlet urged the colonies to engage in the American Revolution, and to take to arms quickly before the opportunity to separate the colonies from the iron fist of the King passed. Paine's publication energized a vast number of colonists to embark on a long and bloody war that imperiled their livelihoods and dismantled their cultural identity-all in the hope of creating a new nation constructed upon the concepts of liberty and independence.

The first steps of liberty began in a Colonial America dominated by divided alliances, and revolutionary writings like Thomas Paine's Common Sense. Paine, through his writings, persuaded these conflicting characteristics into the most exceptional nation ever to be founded in history. The Elementary Common Sense of Thomas Paine is absolutely wonderful, and fun read, and an important tool for reacquainting us with the important writings of the Founding Fathers of the United States of America.

To listen to my interview of Mr. Wilensky, CLICK HERE.
Posted by Douglas V. Gibbs at 10:55 PM