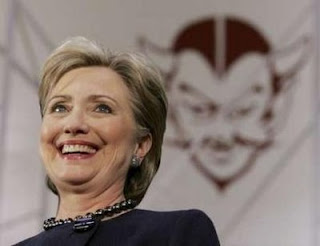 Last December, while being accused by Barack Obama that Hillary Clinton's eight years as first lady was a glorified tea party, not a part of her so-called mass of experience that she claims to be so full of, her Royal Pantsuit fired back with a harrowing tale of a trip to Bosnia. She said that she risked her life on various White House missions, one of which was a vexing flight into Bosnia that ended in a "corkscrew" landing and a high speed, head ducking sprint off the tarmac to dodge snipers. She commented after telling the tale, "I don't remember anyone offering me tea." Problem is, the whole thing was a great big lie. Of course the left-wing media says that she simply "misspoke." Hillary Clinton is a liar.

That was hardly a case of simply misspeaking. Sorry. 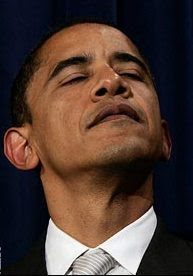 Rev. Jeremiah A. Wright, an official member of Obama's campaign, and a member of Obama's African American Religious Leadership Committee, is a racist. He has made a number of racist comments in the past during his sermons at the church of which Barack Obama has been attending for twenty years. The Obama Campaign has realized that Rev. Wright, and his comments, may pose as a problem for the Obama Campaign. So how did Obama deal with it? Obama says he's never witnessed or heard these statement before. Obama knew what his pastor was saying. That makes Barack Obama a liar. In fact, like Hillary, Obama lies quite a bit. Of course, let us not forget this is the man that says, "My friends, we live in the greatest nation in the history of the world. I hope you'll join me as we try to change it."

Al Gore, the leader of the Worldwide Church of Global Warming, told us that global sea levels would be rising by more than 20 feet with the loss of shelf ice in Greenland and Antarctica, devastating coastal areas worldwide. He told us that heat waves will be more frequent and more intense. He claimed that droughts and wildfires would occur more often. He declared the Arctic Ocean could be ice free in summer by 2050. He proclaimed more than a million species worldwide could be driven to extinction by 2050. And he said it was our fault because of all of that carbon (you know, less than one percent of the total that winds up in the atmosphere) we spew into the sky. All along I have been saying that any warming tendency of this planet is a natural phenomenon caused by solar activity, specifically in relation to sunspots. I have had a couple of experts, Holly Fretwell, a natural resources policy expert, adjunct professor of economics at Montana State University and research fellow at PERC--The Property and Environment Research Center, and Analyst John Berlau of the Competitive Enterprise Institute on my radio show to discuss this, the second of which indicated that not only is there not a consensus of scientists claiming man-made global warming is true, but that recently 19,000 analysts and scientists proclaimed that all of this global warming hysteria is false. So what's the truth? Well, it turns out that Al Gore, with his tampered models and thirst for whatever he is getting out of this, is a big fat liar. In fact, pretty soon I am expecting him to jump on the man-made global cooling hysteria trend. Maybe they will begin encouraging us to put more carbon into the air to combat this sudden cooling trend! Fact is, temperature monitors are reporting widescale global cooling. And why is the warming trend over? What could have possibly caused this turn around? Wait for it. . . wait for it. . . because according to the article linked in this sentence, sunspots have all but vanished, and activity is suspiciously quiet. Notice the harrowing tone of the article. Al, give back the awards (that would be Nobel Peace Prize, Oscar, and I am sure there are more of your ill-gotten awards on your mantle), sit down, and shut up. You are a liar.

Shall we move on to Pelosi? Teddy Kennedy and his lies about his murderous ways? Or what about Kennedy's Soviet connections in order to undermine Ronald Reagan? Well, in the People's Socialist Party (Democrats), there are many lies, and these lies are by elitists whose hubris is so extreme that they believe they are above all of us, the law, and the truth. But to be honest, in my humble opinion, the Democratic Party needs to change its name to The Liberal Liars Club.
Posted by Douglas V. Gibbs at 10:12 AM