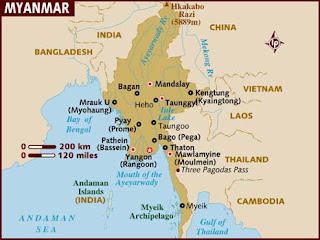 The Union of Myanmar, formerly the Union of Burma, has declared disaster zones in five regions following a cyclone, which struck early Saturday.

241 people are reported to be dead from the storm, nearly 222 of them from the country's low-lying Irrawaddy delta.

"The Irrawaddy delta was hit extremely hard not only because of the wind and rain but because of the storm surge," said Chris Kaye, the U.N.'s acting humanitarian coordinator in Yangon. "The villages there have reportedly been completely flattened."

The storm generated 150 mph winds that blew the roofs off hundreds of houses, damaged hotels, schools and hospitals, and cut electricity to many areas.

In the city of Yangon, roads are blocked, water is not available, and there is no electricity. Yangon residents ventured out Sunday to buy construction materials to repair their homes. Some people expressed anger that the military-led government had done little so far to help with the cleanup.

"Where are all those uniformed people who are always ready to beat civilians?" said one man, who refused to be identified for fear of retribution. "They should come out in full force and help clean up the areas and restore electricity."

This crisis comes at a time during which many political changes are hoped for in Myanmar. A referendum is scheduled to be held on May 10 on the country's military-backed draft constitution. A military-managed national convention was held intermittently for 14 years to lay down guidelines for the country's new constitution, but some see it simply as a dog and pony act designed to give the military-led government increased power.

The new constitution is supposed to be followed in 2010 by a general election, an element of a promise for a "road map to democracy" drawn up by the junta, which has been in power for two decades. Critics say the draft constitution is designed to cement military power and have urged citizens to vote no.
Posted by Douglas V. Gibbs at 6:49 AM