What Is Appeasement? (Now that's a word that makes the left go nuts!) 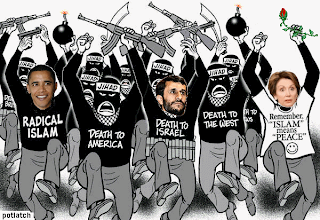 The American Heritage College Dictionary on my desk defines "Appeasement" as:

The Policy of granting concessions to potential enemies to maintain peace. (Often at the expense of principal).

Many Liberals are claiming that when Bush said in his appeasement speech, "Some seem to believe that we should negotiate with the terrorists and radicals, as if some ingenious argument will persuade them they have been wrong all along," he was referring directly to Barack Obama. Perhaps. I won't claim to know what was going on in the president's mind at the time. But references to Neville Chamberlain about his talks with Hitler, and the claim that ". . . we should negotiate with terrorists" is not appeasement by the above definition. However, that does not mean that appeasement is not attached in some way.

What made Neville Chamberlain's actions those of appeasement was not his negotiations alone, but the fact that in those negotiations he gave Hitler concessions in order to keep him from advancing further. The appeasement did not work. Shortly after, Germany invaded Poland, and the world realized that Hitler was not going to stop there, and was plunged into a second world war.

So, here is the next question: Is Barack Obama's potential policies appeasement?

The answer is a resounding yes. A U.S. withdrawal, as Obama is calling for, from Iraq is a concession - a gift to the terrorists, if you may. It is essentially saying to the enemy, "We give you Iraq if you will just be nice from here on out."

The Democrats and Republicans alike, however, are guilty of appeasement - even Bush. After all, the president and Condi Rice's peace talks between Israel and the Palestinian Authority is a discussion of convincing Israel to give up land for peace, isn't it?

And what happened the moment Israel pulled out of Gaza?

Hamas took advantage, took control of the region, and their attacks against Israel increased.

Appeasement is dangerous, and appeasement only delays the inevitable - often making matters worse because it legitimatizes the regimes, and emboldens the enemy.

Does that mean there should be no talks at all?

Talks are ongoing. Obviously, there is constant communication - but public negotiations with states that sponsor terrorism sends the wrong message - - - but Barack Obama is too inexperienced to realize it.
Posted by Douglas V. Gibbs at 9:02 PM