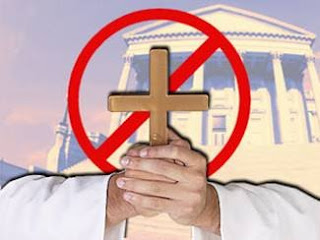 One of the primary motives, if not "the" primary motive, for the English colonization of North America was the search for religious freedom. In England the state-run Church of England was the King's tool for controlling the people, and failure to be a member of the Church of England resulted in punishment - for such dissension against the State Church was not tolerated. The colonists desired to live in a place where they could worship as they pleased, and the New World provided such an opportunity.

The New England Colonies were founded for both economic and religious purposes. By 1627, after seven years of hard work that included fur trading and farming the land, the colony was out of debt and self-supporting. The colonies grew rapidly, spreading their radical idea of religious freedom.

For some, however, old habits die hard. The Puritans (Calvinists) tried to create a theocracy, but found quickly that such a system interfered with the people's desire for religious freedom. In 1634 a committee was appointed to examine the theocratic charter. A new legislature arose out of the findings of the committee, and though not fully democratic (at that point only church members were admitted to the ranks of the voters), the seeds of democracy had been planted.

During that time, while the Massachusetts government demanded membership of the Puritan Church to vote, a whole series of rebels were bred, and founded other New England colonies.

The Rhode Island Charter authorized the settlement of Rhode Island in 1644, followed later by another charter in 1663. The latter established a permanent government based on that of Massachusetts, but not requiring church membership of voters. The complete political and religious freedom attracted dissenters from all over America and Europe.

Historians agree that religion was an important force inspiring migration to the English colonies, especially to the northern colonies. Far fewer would have risked immigration had dissent to a state-run church been accepted in England. This did not mean that the colonists favored freedom of conscience. They simply wanted a place where they could worship as they pleased.

The settlement of Pennsylvania was founded in the interest of guaranteeing both religious and political freedom. The "Frame of Government" (1682) and "Charter of Privileges" (1701) decreed complete freedom of worship and a democratic government in which power was vested in a one-house elected legislature.

In the colonies eventually no one church was dominant, with each religion contributing more to the theory of religious freedom. Due to fears of governmental control of any one church, a system of voluntarism was developed, through which churches were supported by voluntary contributions, rather than taxes as was the standard in many European countries.

Though some of the religions remained skeptical of religious freedom, such as the Puritans who banned non-church members from voting at first, banished and persecuted Baptists and Quakers, and persecuted people they deemed as witches (through an inaccurate interpretation of scripture), the desire for complete religious freedom eventually impacted all of the citizens of the colonies, and the fundamental basics of the idea of freedom of religion took hold.

The evolution of liberty is intertwined with the pursuit of religious freedom. The non-Biblical actions of churches, like the Puritan Calvinists, enabled other churches to prosper, which led to a revival of evangelism in the 1720's. This revival strengthened more Biblically grounded churches like the Baptists, giving the common people more control over the churches, and more religious freedom as originally intended.

By the eve of the American Revolution, the colonists had determined that democracy was the best means of government (though later the founding fathers agreed upon a representative republic instead), and supported the emphasis on individualism where limitless opportunity made men less dependent on the social group, as well as less dependent upon any centralized government control. This, in turn, encouraged a belief that no distant parliament could solve their problems, and that their prosperity lay in trading outside the empire. No ruler, they realized, should be able to interfere with their progress or their political freedom. Self-rule was the only answer, and by then the colonists were convinced that King George III was denying them their God-given rights.

Understanding the drive for independence and religious freedom, it is easy to see that the founding fathers did not want the government telling the church in any way, shape, or form how to worship, nor did they want the government dictating to the church what they could or could not do in relation to church business.

Around the world, and even around America, speaking out about the Christian teachings regarding homosexuality can result in a criminal crackdown against you. And though currently the law is not "requiring" churches to marry gay couples if it is against their doctrine, the fear among pastors is that this will change, and hate-crime laws will be used to persecute any clergy that refuse to perform a ceremony for a gay couple on the grounds that it is against the teachings of the Bible.

Don't forget about the New Mexico family owned photography studio who was fined more than $6,600 for declining a demand to take pictures at a same-sex ceremony.

Answer me this: After I have illustrated the struggles our founding fathers went through to ensure we have religious freedoms, and where the state does not dictate to us how we worship or conduct our religious affairs, why is it that the state can dictate that a photography studio must pay a fine for not taking pictures because it is against their religion? And is the government dictating to pastors that they must conduct gay marriage ceremonies whether they like it or not on the horizon?