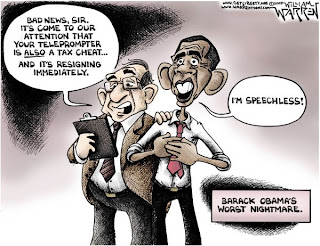 In Obama's dream world he is articulate, suave, masterful, intellectual, and can turn rain into sunshine. His flock of followers swoon in his presence. Two town hall meetings in Los Angeles and nearby Orange County distributed tickets for the meetings within 90 minutes to the ravenous crowd - some people camping out a couple days in order to be in line early enough to score these precious golden tickets. Barry is the first sitting president to be interviewed on a late night television show, last night appearing on Jay Leno's Tonight Show. Barack Obama is a rockstar, messiah, and president all rolled into one to these people. He can do no wrong, especially when compared to those idiots George W. Bush and Sarah Palin. Right?

Unfortunately, for those few folks that are still rabid believers out there that have lost all objectivity when it comes to President Obama, he is more like a professional wrestler than a leader of the free world. His public persona is a false image generated by members of his staff, and a, to borrow a word from Bernie Goldberg, "slobbering" media. When his words are chosen carefully by his staff, and when he has somebody else's words flashing in front of him on his teleprompter, usually Obama comes across as a smooth character. However, in his unguarded moments the true Obama emerges, and he becomes a gaffe machine, and an insensitive oaf. Of course, while campaigning, Obama's numerous gaffes were never reported by his adoring press. They found ways to either bury the data, or avert the public's attention to false accusations against Sarah Palin.

Success using these shameful tactics were easy for the mainstream media, after all, for they already had eight years experience demonizing George W. Bush. Of course they would never say anything that may be anything other than flattering about Barack Obama.

Case in point: Remember when Obama and crew gave the thoughtless gift of 25 DVDs to British Prime Minister Gordon Brown? Well, it turns out that not only was the gift thoughtless, but it is useless too. Obama and friends failed to realize that DVDs in America are considered Region 1, and only play on North American Video Players. Britain is region two. So, when Brown tried to play one of his new DVDs from Obama, they didn't play.

Better still in showing Obama's idiocy is his recent non-teleprompter moment on Jay Leno's Tonight Show where he compared his sorry bowling game to the Special Olympics.

Well, so much for Obama being a brilliant academic. Time and time again he keeps on proving he's a bigger idiot than the leftist media tried to make Bush and Palin look like.

Could you imagine if George W. Bush had done either of the above? The media would have had a field day with it. But Obama's latest gaffe was on national television in front of a live audience, and not a peep. . . well, okay, a few peeps, but you know what I mean.

Oh, and if you missed it, here it is:

Ironically, it is Down Syndrome Awareness Day tomorrow. And I am appalled that the Left criticized Palin for birthing little Trig because of his handicap, or that Obama would senselessly say such a thing as he did last night on television, and hardly get called on it. I taught at a school for the mentally retarded (as it was called back then) when I was much younger for a few years, and these kids were hardly anything but the neatest, most loving, enthusiastic people you'd ever meet.

Barack Obama, you should be ashamed of yourself - and your automatically generated apology from someone else's mouth in the White House is hardly an acceptable enough apology.
Posted by Douglas V. Gibbs at 5:24 PM