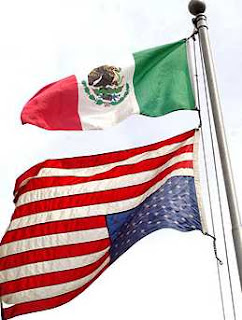 Ninety days after the current legislative session ends a new Arizona state law will go into effect. The initiative signed by Arizona Governor Jan Brewer on Friday allows local law enforcement to ask suspected individuals for proof of citizenship. Brewer states that if the federal government was doing its job to enforce immigration laws, the state law would not be necessary. When referring to the federal government's inaction regarding the illegal alien issue, Brewer said, ". . . decades of inaction and misguided policy have created a dangerous and unacceptable situation."

President Obama called the new Arizona law "misguided" and "irresponsible," while undermining the fundamental notions of equality. Barack Obama has instructed the Justice Department to examine the law's legality.

Opponents of the initiative demanded the Governor veto the legislation, and protested outside the state Capitol. Folks in opposition of the law consider it a violation of civil rights, and racist.

After the bill was signed a riot broke out in the streets of downtown Phoenix. The disturbance commenced when the protesters got into a fight with a man who supports the law. Riot Police restored order shortly after.

Hispanic political groups have stated they believe the new law will promote racism, while supporters say the law will boost the success of law enforcement agencies in their combat against illegal immigration in Arizona.

Mexico's Senate has warned the new law will impact cross-border relations and unanimously passed a resolution urging Brewer to veto the law.

Racism and civil rights, despite Obama's misguided declarations, has nothing to do with this issue, nor the law passed in Arizona. By entering the country illegally, which means the border jumpers have broken American immigration laws, illegal aliens have committed a criminal act. In the absence of the federal government sealing the borders, and ensuring that people who have properly navigated the immigration process only enter this nation, Arizona has rightly taken to task the enforcement of the laws themselves.

States and cities, in fact, that do not enforce the law, and establish sanctuary cities, or sanctuary zones, are not only disobeying the law as prescribed by the Constitution of the United States, but by harboring illegal aliens those sanctuary supporting governments are demonstrating contempt for federal law (no different than Obama is demonstrating contempt for the law with his statements that criticized the new Arizona law).

President Obama, in his statement criticizing Arizona's law, is actually in opposition to U.S. Law. U.S. Code, sections 1324 and 1325 considers it a felony to conceal, harbor, or shelter illegal aliens. Failing to report illegal aliens also violates the Immigration and Naturalization Act sections 274 and 275. U.S. Code and the Immigration and Naturalization Act also considers entry into the United States without inspection to be a misdemeanor, and repeated illegal entry is a felony. In other words, not only is Barack Obama, and folks that are standing in opposition to Arizona's new law, wrong in their criticisms, but Arizona is actually ensuring that the state is following federal law with the passage of this bill.

Understand that I have no problem with immigration. My wife, in fact, was born in Mexico, and immigrated with her family legally to the United States when she was a child. She naturalized in 2007, and was proud to join the ranks of people who call themselves "American." She recognizes her Mexican heritage, but refuses to call herself a Mexican-American. She set aside her allegiance to Mexico so that she may give it to the United States, and as a result, she only calls herself an American.
She only took so long to make the decision because of the La Raza rhetoric that was being fed to her that proclaimed if she naturalized she would lose her culture, and would be betraying "her people."

She didn't lose her culture, she gained an additional one.
I support immigration by people who come to this country by following the law. The folks who navigate the process legally do so because they have the full intent of assimilating into the American Culture, and joining the melting pot as a productive, and proud, American.

Illegal is illegal, and Arizona's law is necessary, and completely Constitutional.

As a result of the law, we will see the illegal alien problem decrease in Arizona, and that is why 70% of the people in Arizona supports the legislation.