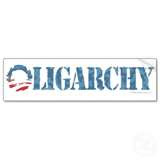 An oligarchy is when the many is ruled over by a few elite.

In California 7 million voters voted for Proposition 8, and the opinion of a single gay judge struck down California's Constitutional Amendment designed to protect marriage. The political opinion of the one judge has been elevated above the desire of the populace. Does our vote even matter?

If a single judge using his own activist opinion regarding a behavioral preference can overturn the vote of the people, then what we are being told is elections don't matter.

And the message the judge has sent is that the people can't be trusted to define marriage, and the ruling elite through the judiciary and the executive branch must do it for the people.

President Obama supports the decision because it is politically in his favor to do so, even though technically it contradicts his comments that, ". . .marriage is between a man and woman and I am not in favor of gay marriage," of which Obama said as a presidential candidate just days before the election in 2008.

A similar disregard for the vote of the people happened in Arizona, where Judge Bolton struck down what the people desire in that state in regards to enforcing immigration; and another complete disregard for the vote of the people also occurred in Missouri, where the voters in Missouri, by a 40-point margin, approved a ballot measure rejecting the individual mandate at the core of President Barack Obama's health care law. Asked what the vote meant to the White House, press secretary Robert Gibbs said: "Nothing."

What we are witnessing is an American Oligarchy carried out through the judiciary, using the age-old belief of the "General Will."

The General Will is an idea of French philosopher Jean Jacques Rousseau who was one of the influences that brought about the French Revolution shortly after the writing of the U.S. Constitution over two hundred years ago. Rousseau's main idea was his teachings of the supposed existence of the General Will.

This is why in all of these recent judicial cases we are seeing these judges acting as if they are more interested in making a political statement than upholding the rule of law.

And now the Senate has voted to confirm President Obama's Supreme Court nominee Elena Kagan, yet another judicial activist that is more interested in the leftist political agenda, than the text of the law of the land. And don't forget, Kagan is the one who was willing to manipulate the law and facts to deny military recruiters equal access to Harvard law students because she did not personally approve of our military's personnel policies regarding same-sex relationships.

To these people, their agenda comes first, and the opinion of the people, even through the ballot box, means nothing to these ideologues.

As a result, the Congress and the vote of the people is becoming irrelevant, and the Executive Branch is gaining power in ways never intended by the Founding Fathers. . . and Obama is using the courts to gain much of that power.

What we have is the rise of an American Oligarchy, and only State Sovereignty will stop it, if the States are willing to follow through, and stick to their guns.

The Obama Elite vs. The American People - Heritage Foundation