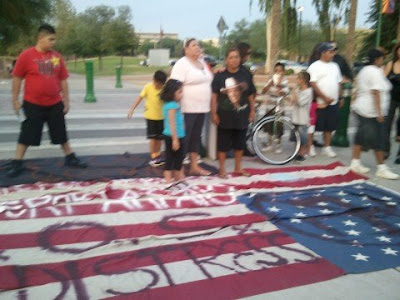 Yes, indeed, the desecration to the American Flag you see in the picture above is illegal. Nobody was punished, however, and nobody will be. The crime of desecrating the American Flag is a federal crime, but the U.S. Government is not willing to enforce the immigration laws, so why would they be willing to prosecute people spray painting and walking on the American Flag who are doing so in support of the illegal aliens the federal government won't go after?

The thing to really consider is if that had been a Mexican flag being desecrated, there would have been an uproar in the press, and the offenders would have been fined and jailed.

No doubt in my mind.