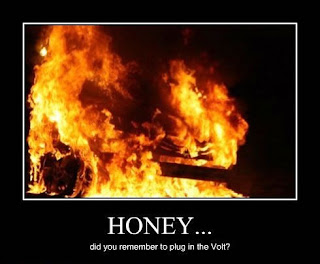 President Obama disagrees with the market forces, so to make sure his precious green technology moves forward, he has been trying to find ways to force the market to move in a green direction. His policies call for the auto industry to make cars with zero emissions. In his State of the Union speech he even said the auto industry is back in America. . . with cars even the dealers won't accept?

The internal combustion engine has advanced in many ways, and still remains the most efficient engine we have. Electric cars are a bust. They are inconvenient, expensive, and the technology is not refined enough, yet. Will we someday have vehicles that don't run on gasoline? If the market allows, yes. It is not up to government, it is up to the consumers.

This is nothing new. In the 1970s the liberal left demanded by law lower emissions and better gas mileage, but the only way the auto companies could comply was by downsizing cars. So instead of the big ol' boats on the roadways, we wound up with little shoeboxes that crumbled upon impact, and we wound up with more deaths in auto accidents because the lighter materials, and lighter vehicles, were no match for the force of a collision.

Did they realize their mistake and reverse the devastating laws? Of course not. They simply tried to fix the problem with more government control. . . a lower speed limit and a eventually mandatory seat belt laws.

Ahh, but now they want our older cars off the road again, and the ridiculous smog laws are not enough, so Obama and his gang of liberal idiots have decided it's time for government to take control again. . . whether you like it or not.

Damn the market, they figure they can force the system to move in their direction. After all, once they convince everybody that the man-made global warming lie is true, despite the evidence of manipulated data, and even as the temperatures drop, they think everyone will look back and be glad they were forced into inefficient, inconvenient cars by those benevolent dictators in Washington.

The problem is, nobody wants cars like the Chevy Volt. They are expensive, and are not selling. Market forces have refused the electric car to the point that even a number of Chevrolet dealers are turning them down because they can't sell them. GM is trying to get the dealers to take the cars, but the cars just aren't selling.

On top of the fact that the market is not interested, the investigations regarding the risk of fires in the car's battery pack have not been resolved yet either.

Does that mean we will never have electric cars, plug-in hybrids, or other cars like them? Not necessarily. As long as the government stays out of the market, the private sector may move in that direction if the consumers lead it in that direction. Innovation happens that way, not when ordered to by the government.