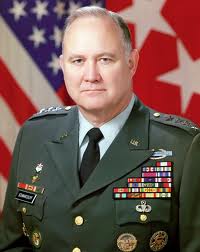 Stormin' Norman Schwarzkopf was the coalition forces leader during the Persian Gulf War.  Iraq's dictator Saddam Hussein invaded Kuwait in 1990, claiming that Kuwait stole Iraqi oil reserves.  Operation Desert Storm was launched in 1991 by President George H.W. Bush in defense of Kuwait, with a coalition of over 30 countries on board.  On Jan. 17, 1991, the five-month buildup called Desert Shield became Operation Desert Storm as allied aircraft attacked Iraqi bases and Baghdad government facilities. The six-week aerial campaign climaxed with a massive ground offensive on Feb. 24-28, routing the Iraqis from Kuwait in 100 hours before U.S. officials called a halt.  The military operation was successful beyond expectations, and Schwarzkopf was a hero.

General Schwarzkopf volunteered for, and served in, Vietnam, entering the war in 1966.  He was highly decorated for his service in that conflict.  His final mission as a military man was in Tampa, Florida, as  commander-in-chief of U.S. Central Command, the headquarters responsible for U.S. military and security concerns in nearly 20 countries.

Though he initially supported the invasion of Iraq in 2003, based on the intelligence regarding Hussein's weapons of mass destruction, he questioned if the war would resolve as quickly as the Bush administration believed.  During the conflict, Schwarzkopf remained out of the spotlight, and remained fairly ambivalent regarding the operation.

After retiring from the Army in 1992, Schwarzkopf wrote a best-selling autobiography, "It Doesn't Take A Hero." Of his Gulf war role, he said, "I like to say I'm not a hero. I was lucky enough to lead a very successful war."