Confiscation of Our Guns is the Goal 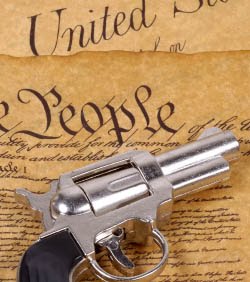 History shows that National Registries lead to gun confiscation.  Gun Control is the tool of tyrants, and politicians positioning themselves for more power.  The defenseless is easy to control.  Evil, however, does not expose itself as evil, but poses as an Angel of Light.

We are told that gun control must be put into place for the children.  They are only acting for our own good - for the common good - for our safety.

We must rid the world of "assault weapons", we are told, for the safety of the children - never mind that the criminal element will still find a way to get their hands on these guns, and removing guns from law-abiding citizens are simply changing the former gun owners into targets.

In Britain, after guns were confiscated in 1997, the rate of home invasions and violent crimes shot up dramatically.

We are told they must take the guns because of the irresponsible gun owners that use their guns in school shootings, theater shootings, etc.

I wonder if we should yank everyone's driver's licenses because there are drunks on the road?

Okay, now for some of the latest madness.  Sit down, for this, some of these headlines will confound you. . .

Obama seems to think he is king, and when the ruler says there had better be gun control, the peasants better comply.  The Republicans, however, aren't all willing to play ball, so easily, and this is making Heir Obama pretty mad:

I suppose Obama doesn't quite understand the meaning of "shall not be infringed" - or, he doesn't care.

Of course, Obama has figured out he can't blame President Bush for everything, anymore, and though he has been President for over four years, and two of those years the democrats controlled both Houses of Congress, Obama needs someone to blame - so now everything is simply the GOP's fault - especially those pesky TEA Party types.

How dare they not confirm to the dictator's wishes.

Barack Obama is not pleased; The President on his enemies, the media, and the future of football - New Republic

Remember when Obama said years and years ago he will not go after your guns?  And remember when the democrats said they only want your "assault weapons?"

Ooops, they were lying again!

Fortunately, gun owners have this funny thing about freedom, and their God-given rights.  In New York, where the gun control laws have gone way beyond expectations, the subjects are refusing to register their firearms.

and the number of County Sheriffs refusing to implement these unconstitutional federal gun regulations is growing:

The 2nd Amendment was written to tell the federal government "hands off" the guns because the right to keep and bear arms is necessary for the Security of freedom against a tyrannical government.

You can have mine if you can get past the last thirty yards, and can pry them from my cold, dead hands.

An illegal search and seizure will be met with force - and the only departure will be in a body bag.

Hey, Obama! Hands off my right to keep and bear arms!

-- Political Pistachio Conservative News and Commentary
Posted by Douglas V. Gibbs at 7:43 AM