Oh, were the Academy Awards on last night? 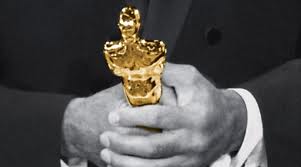 An Oscar in the hand is better than two in a bush, right?

The Oscars?  Did anyone watch the Oscars?

I am not a huge fan of Hollywood, for the most part.  I don't mind going to the movies, and there are some that I truly enjoy, but I don't hold these people up as some kind of heroes, or anything.

I am not anti-Hollywood, I just don't think that we should hold up too high people that are basically good at pretending.  Sure, it takes a lot of talent.  I took acting classes in 1995, and even had an agent for a while, but the arrogance and the attitudes drove me nuts.  I was happy when I left the industry after a short stint, a couple vouchers, and a couple commercials.

What did I learn?

Most actors tend to be very short, the snack table is awesome, and behind all of the makeup and fake personalities, they are simply your average, everyday, people.

Now, getting back to the Academy Awards. . .

I am sure in their industry this is huge. I get it.  A great big pat on the back is nice, every once in a while. When I have won awards for something or other, I enjoyed the instance.  I smiled.  I waved.  I appreciated the applause, and the kind words everyone threw my way.  Then I went home, put the trophy on the shelf, and went back to just being unglamorous me.

The Oscars is something different.  It is a celebration of being one of the beautiful people.  It is the high school clicks all over again.  You can feel the fakeness of the hugs and kisses - mwah, mwah - and you can almost hear the piercing scream of the knives as they are plunge into each other's backs.  And if you aren't a liberal in Hollywood, and a hard left activist at that, there won't be any awards coming your way - more than likely.

Naw, that's okay.  I kept my TV off.  There's nothing to watch, anyway.  Football season is over, and Opening Day for Baseball is still over a month away.

I will let the actors, and the rest of the beautiful people, keep their fantasy world.  It's not for me.

-- Political Pistachio Conservative News and Commentary
Posted by Douglas V. Gibbs at 7:45 AM