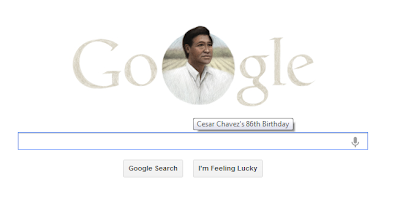 After making some breakfast, I sat down at my desk to prepare for my Sunday Morning Constitution Study Radio Program.  I flipped on the television, and changed the station over to a place I don't get to watch often, Fox News.  When a news story I was interested in flashed across the screen, I went to Google to look up the particulars on the item.  I expected to see Easter decorations around the Google logo, but instead, it was an image of Cesar Chavez.  It seemed to me a puzzling thing to do on Easter.

Cesar Chavez was an important labor organizer in Los Angeles who died in 1993, and is an important historical figure.  He co-founded the organization now known as the United Farm Workers union (UFW), and I am in no way diminishing the importance of his efforts.

President Barack Obama in 2001 proclaimed March 31 to be “Cesar Chavez Day," as a part of his push to make Americans "serve" their communities.

Fine, whatever, but to place Cesar Chavez on the site instead of Jesus Christ on Easter?

It's a free market, and Google can do whatever they want.  I am not demanding that they change it.  But the very fact that Google did this is very telling.  We already know Google is biased, and leans way left.  It takes pages after pages sometimes to find an article not written with a liberal slant on the search engine.  I get it, the people that run Google are so far to the left that Christianity is a minor part of society to these people.

Next, I am half expecting them to put Muhammad up on Constitution Day, or Voltaire instead of Christ on Christmas.

As a free market, I hope the consumers act as needed, and Google reaps the repercussions for their decisions.  Actions have consequences.

-- Political Pistachio Conservative News and Commentary
Posted by Douglas V. Gibbs at 6:51 AM