Forget Illegal Immigration. . . It's an Invasion 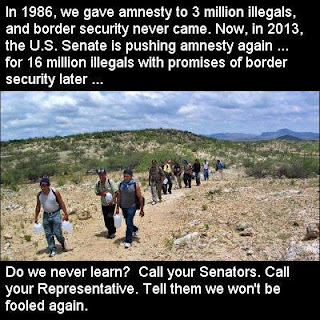 Sometimes I see a commonality between illegal aliens and refugees.  After all, in both cases the people are trying to escape from a country they don't like.  Well, at least that is what we are supposed to believe.  The problem with illegal aliens is that unlike refugees, they aren't looking for asylum, and they don't desire to become Americans.  In the case of the Mexican illegal alien, they wish to change this country into an annex of Mexico, an extension of Mexico, they want to turn America into the country they claim to be escaping, seeking a better life.

If Mexico is so bad, why do the illegal aliens want to transform America into Mexico?  And better yet, why not stay in Mexico, and work to change it for the better?

The founders were concerned about divided allegiance.  Those that refuse to be fully American cannot be trusted with our liberty.  Remember our history.

The United States had just won their independence from Great Britain. The British considered all of the supporters in the colonies of the independence movement to be traitors. The British did not even see the Americans as victors of the Revolutionary War. Britain had pretty much thrown their hands up, and pulled out of America because of the need to address tensions with France. The British attitude was that the American attempt at self-rule was going to be a dismal failure, and those loyal to the crown, and probably many others, under the weight of the massive failure of the American experiment, were going to be begging for the British to return some time in the future.

The War of 1812 was America's second revolution. Britain had returned to regain control of the petulant children of the colonies. At that point the British had not even recognized the United States as a sovereign nation. If the British troops, when they burned down the White House, had gotten their hands on President James Madison, they would have executed him for treason against the British Empire, because the British still considered the Americans to be British subjects.

Long before the War of 1812, as the American Revolution wound down, many of the British loyalists, or "tories," fled back to Britain. Some of them remained in The States. During the Revolution only a third of Americans supported the war effort. Another third were non-committed, and were willing to accept the resulting circumstances, no matter how the chips may fall. The final third were loyal to the British Crown, and viewed the American Revolution as an act of treason against King George. Often these people were English born, or the children of British citizens. It was the issue of divided loyalty, such as in the case of those that opposed the war, that the Founding Fathers were concerned about when debating the U.S. Constitution and determining who could be citizens, and what the parameters would be regarding that issue.

During the writing of the Constitution the debates in Philadelphia often centered on "allegiance." If this new federal government they were creating was going to work the participants at the highest levels of government needed to have a full allegiance to the United States. This was especially true when it came to the executive, which would be the President of the United States - a condition known as Natural Born Citizen.

British common law in this matter did not properly address these concerns. Section 212 of Vatell's Law of Nations, which had been around since 1658, and had already been largely adopted by the Americans as a fitting definition of Natural Born Citizen, fit nicely with the need to ensure the President had no divided loyalties. Benjamin Franklin felt so strongly about the definitions in Vatell's volumes that he purchased three copies of the book. He bought one for himself, and two for the Constitutional Convention. George Washington checked out Vatell's Law of Nations from the New York Public Library in 1789, and still maintained possession of the book at the time of his death.

With spies from Britain combing the nation, simply being born on American soil was not enough, as far as the founders were concerned. When it came to guarding against the leaders of this nation having divided loyalties, the definition of Natural Born Citizen had to be more stringent than the existing one under British common law. The President needed to be fully American, with American citizens as parents at the time of birth. That was the commonly accepted definition in America at the time of the writing of the Constitution, because it was necessary to protect against the president having a divided allegiance.

When it came to immigration, the same care was taken.  Immigrants were expected to follow the protocol in place, and to come to America willing to let go of their allegiance to their original nation, and for them to be willing to give full allegiance to the United States.  Assimilation was necessary, and being wholly American was the expectation.

The second largest source of revenue in Mexico is the money sent back by the illegals from the United States.  In other words, by allowing illegal aliens to pour into the country, we are letting Mexico's poor come into our nation, take American jobs, and send American money away from our businesses and into the coffers of Mexico.  Instead of that madness, why don't we stop the flow of illegal aliens by simply enforcing the law, and in turn help Mexico become a land of opportunity?  Otherwise, the status quo will continue, and it will place our national sovereignty at risk.

Mexico is in trouble because of leftism.  It is a great example of what happens when liberals run amok.  Socialism in that country is why they are so poor.  If Mexico is in such bad shape, the last thing that country needs if for massive amounts of their population to be coming here - and the last thing we need is for them to come here with the intention to make the United States more like Mexico.

Illegal aliens need to go home and make where they came from more like the U.S., basing their system on individualism, and a free market, capitalistic system.

Such an endeavor would need for the indoctrination to be broken, for the Mexican population to be retrained, and for free market capitalism to take root once again.  The leftists in Mexico have taught the populace to frown upon such a concept. The Left wants to bring the U.S. down to Mexico's level, not to lift Mexico up to our level.

Besides, such an invasion plays into the democrat party's desire to increase the number of their voters, in an attempt to make the U.S. a single party system, while also playing into the Mexican Marxist's vision of taking back the American Southwest for Mexico.

Believe me, this is not about immigration.  It is all about invasion.

10 Problems with the Gang of Eight Immigration Bill - Heritage Foundation

The Cost of Amnesty - They Come To America