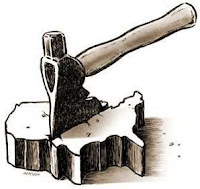 The liberal left is in the process of racial positioning.  The task of dividing America along racial lines has been a successful ruse.  When America is a house divided, we fall under the threat of tyranny.  In line with today's civil rights leaders, the Obama administration, and the democrat party, are crying foul after the Zimmerman verdict; not because they are in search of justice, but to keep the fires of racial divide burning.  Without racism in America, the race-baiters have no movement.  Without racism in America, the black civil rights leaders, and people like Barack Obama, have no reason to reside in a position of prominence.

They know that the children are watching.  The deconstructionists have taught the children well, convincing the young minds of America that we are a racist nation, born with the racism of slavery, and driving forward as a nation run by, as Reverend Jeremiah Wright put it, "Rich White People!"

We must stamp out the racism, for the sake of the future of the children, we are told.  Otherwise, the children will have to pay the bill that we were unwilling to resolve.  The task of stamping out racism, however, is impossible. . . not because racism is incurable, but because without racism the race-baiters would have no weapons to use against us so as to force us into their mold.  They would have no cause, no crisis, and no grievance.

Barack Obama knows the power of racism.  We are told he taught Constitutional Law in his younger years, but what he taught was how to use the 14th Amendment to gain a racial advantage.  He taught how to use racism, and claim it is constitutional.

The narrative being pushed by this administration is not that racism exists because whites have the potential to be racist, but that a number of people in this nation are racists because they are white.  You can't escape it.  Even locking your door is racist.  You can't help it. You're white.

As racism rises in this nation under Obama's watch, where blacks are being told by the administration that all whites are "creepy ass crackers," the democrats are now turning on any republican leadership, as well.  They plan to take down the conservatives of the GOP before they can gain any ground.  The liberal left is working to defeat the republicans, using accusations of racism, before those people can even become contenders.

Rand Paul is being accused of being a racist because of his aid, Jack Hunter, also known as the Southern Avenger (of whom's articles I have read often).  Hunter wears a confederate battle flag mask in an image attached to his "Southern Avenger" persona.  He believes the confederacy had a right to secede, on the grounds of State's rights, which the left believes automatically makes him a racist.  As far as they are concerned, Hunter wants a return to slavery.  They think he's pissed that blacks are walking around freely.  He simply recognizes that the civil war began due to state's rights, and the slavery component did not become the primary reason until Lincoln made it that way with the Emancipation Proclamation.

Ted Cruz has also become a target of calls that he's a racist.  In his case, it is because he attended an Immigration Rally hosted, according to the Left, by a Proud Racist.  Ken Crow, a Tea Party leader who spoke at the rally, is misrepresented in a statement about "breeding," which, according to the Left, makes him racist.  John Trenton, the organizer of the rally, is portrayed as a white supremacist, again misrepresented.  The very fact that the rally is against illegal immigration makes it racist, as far as the left is concerned.

Obama is right, to a point.  Racism is alive and well in America, and the President is the lead racist.  He is leading the charge for racial division, and the troops are falling in behind him chanting the same racist rants.

Racism is alive and well, by design, and the democrats are creating it, and using it, for power through division.

And of course I am sure the leftists think that because I think Obama, and a number of blacks following his madness, are racist, that makes me racist.

That is how it works.  They can't be racist, but I must be, because I am white.