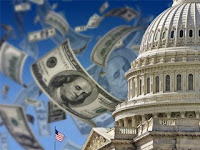 The budget battle, and the GOP desire to defund Obamacare, has met at a crossroads in Washington. . . and it brings back memories of budget battles of the nineties, between the Republican dominated Congress and President Bill Clinton.  The conventional wisdom is that the republicans lost that battle, but the truth is not quite that.  The fear of the media misconstruing the facts regarding the shutdown, as they did in 1995, has the GOP nervous.  Should they shut down the government?  Will they lose the battle of "image with the public" through the eyes of the biased media?  Or should they grow a pair and do what needs to be done and let the government shutdown?

A Government Shutdown is not the ultimate desire, but a necessity to defund the defundable parts of the Affordable Care Act.  The democrats have already begun their attacks, claiming it is the republicans that want to shutdown the government over a silly little thing like "keeping healthcare away from Americans."

The GOP needs to turn that argument around.  They need to explain it is the opposite.  Obama and the democrats are willing to defund the entire government rather than sign a bill that does not contain funding for their precious government intrusion into the health insurance industry - despite the opposition of a majority of Americans.

Fascinatingly, Obama has been working to defund his own law, losing revenue by delaying the employer mandate, effectively losing revenue that would have materialized from the penalties.

Reducing the burden on employers, or at least that was their excuse, and the delay of the consumer cost cap until 2015, were not done for the reasons stated, but to delay the catastrophe of rising costs and rising premiums that would result when those provisions go into effect.  The law is designed to destroy the private health insurance industry so that the people will begin begging for "single payer" to save them from the mean ol' insurance companies.

A loss of revenue, and the rising cost of funding the law, poses a threat that could greatly increase the amount of funding.  That alone should make us realize the danger this law poses to our economy.  For the sake of slowing down our rapidly rising national debt, we must defund the whole failed monstrosity.  The drain on the treasury, the insidious nature of the law that combines the destruction of a private industry while allowing government to gain control of our lives through medical dictates, and the unconstitutional nature of the law from its establishment to the constant delay and modification of provisions by President Obama, is reason enough to do what can be done to defund it.

The republicans, however, in order for that to happen, have to be willing to stand behind their resolve, even if it means allowing a government shutdown. . .  because the democrats refuse to sign a budget without funding for Obamacare being in it.

By refusing to accept a budget with Obamacare defunded, Obama and his minions are willing to defund the entire government, shutting everything down, and if the GOP would just recognize it that way, and articulate that reality to the American people, they will win the battle of words over the impending budget battle.

As for the concern that a government shutdown will ruin the next election for the republicans, we must remember that despite conventional wisdom, the GOP did not lose last time this happened as we are being told.

Representative Mike Lee is one of the republicans that seems to have grown a pair.  He says we have to defund Obamacare.  This is the last gasp.  This is the last chance.  We must do it, even if it means allowing the government to shutdown because the democrats refuse to sign a bill without funding for Obamacare in it.

The delays the democrats keep putting into place is evidence that Obamacare damages the economy.  That is why they keep delaying everything until after the 2014 election.  They need the House, and if Obamacare is not revealed for the failure it is before the election, they think they can take the House of Representatives.

The Republicans are gun-shy because they have been convinced that they lost the 1995 budget battle, and the media is already saying the republicans will lose the House in 2014 if they let the government shutdown now.  Allowing the government to shutdown has the republicans scared out of their minds.  The 1995 budget battles, as far as the GOP establishment is concerned, resulted in a series of disasters.  They believe that because that is how the media portrayed it.  But after that battle, the republicans won seats in the Senate, and they held the House.  Not exactly evidence that it was a failure.

On paper, the budget battle in 1995 was not a disaster, but a big success.  The GOP was just too afraid to correct the media when they painted it otherwise.

The economy was not a disaster after the government shutdown in 1995, either.  It resulted in a slowdown of the growth of government.  Children didn't starve, the elderly did not eat cat food out of cans, and entitlement checks did not cease to be written.  Reductions in spending occurred, and the economy benefited as a result.

And remember, part of the problem was the republicans did not have any allies in the media, but now they have the new media.  Now the conservative blogs will go to bat for them.  The results should be even more favorable, because voters just want the GOP to act like the opposition party they claim to be.  Voters wish for them to stand up to the democrats, and actually have enough intestinal fortitude to follow through with whatever it takes to stop the liberal leftist madness that Obama and his minions have been inflicting on this nation's economy.

There is an entire conservative media that will battle the propaganda put out by the leftist media.  The fears of the Republican leadership is not totally unfounded, but those fears are not completely realistic, either.  Their fears are based on silly notions put out there by the democrats and their compliant press. The republicans must defund Obamacare, even if it means a government shutdown.  It is time for the republicans to finally stand up to the democrats and say, "Enough is enough.  We are going to fight this fight, and quit being afraid."

How ObamaCare could cost Republicans the House in 2014 - Yahoo! News

Is ObamaCare a stepping stone to government-controlled health care? - Fox News
Posted by Douglas V. Gibbs at 4:19 AM