Russia: "Syrian Airspace Under Our Protection" 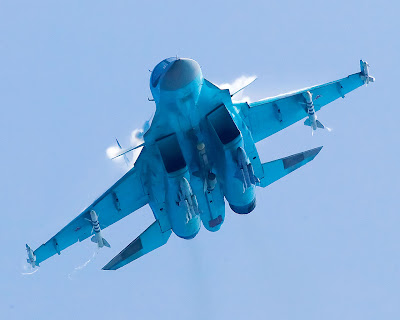 I touched on this likelihood just the other day, and sure enough....:

Russia has delivered a behind-the-scenes threat to retaliate if airstrikes carried out by the U.S. or its allies target the regime of Syrian President Bashar al-Assad, Middle Eastern security officials told WND.

The security officials said Russia complained Sunday in quiet talks with United Nations representatives that the Obama administration’s current aerial campaign against Islamic State fighters in Syria is a violation of international agreements regarding control of Syrian airspace.

The officials said Russia warned it could potentially retaliate if U.S. or Arab airstrikes go beyond targeting [the] Islamic State of Iraq and Syria, or ISIS, and instead bomb any Syrian regime targets.


Given that the Obama Regime is only technically "bombing" anything in Syria territory (or Iraqi territory, for that matter), this is probably not a huge concern.  But mistakes can be made - "fog of war," and all that - and it's anybody's guess how elastic is Boy Assad's - or Vladimir Putin's - definition of what constitutes "targeting the regime of Syrian President Bashar al-Assad".  There's always the possibility that Czar Vlad might see this as an opportunity to provoke a direct military confrontation with The One as a means of bullying massive concessions out of him via-a-vie eastern  Europe - its "de-NATO-ization," as it were.  And forgetting about Ukraine altogether.

Or matters could get totally out of control.....

This is what happens when a POTUS goes totally limp across the foreign policy board and out of his way to aggravate friend and foe alike: He cannot belatedly address one crisis without exacerbating one or more others. His options are whittled down to the point where war on the enemy's terms and initiative is the only one left.

Or, in other words, welcome to "smart power".