As seen on television, and all over the World Wide Web:

In 2014, Doug made appearances on Fox and Friends a couple times, Hannity on Fox News Channel twice, The Rick Amato Show on One America News, Al Jazeera, ARD German Television, and various local television and radio news broadcasts, in connection with the demonstrations in Murrieta that turned around busloads of disease infected illegal immigrants.

Doug took the angle of a concerned citizen wishing to protect the receiving population from disease, crime and terrorism, as well as exhibiting a constitutional point of view, indicating that the issue was a case of the White House trying to force its agenda upon a locality.

On July 3rd, Doug appeared on the Rick Amato Show.  He had been scheduled to be on the show a week prior for other reasons.  When the Murrieta Protests erupted, the appearance on One America News became all about the Murrieta Immigration Protests.  Doug was one of three members of a visiting Grassroots Panel.  Video is forthcoming.

Fox and Friends first asked Doug to be on the air with them on July 4th, after a local Fox News reporter had already interviewed Doug at the protest location.  Jesse Watters interviewed Doug that morning, trying to understand why, of all cities, Murrieta was chosen as the processing station for the overflow of illegal aliens being flown in from Texas.  View the video HERE. 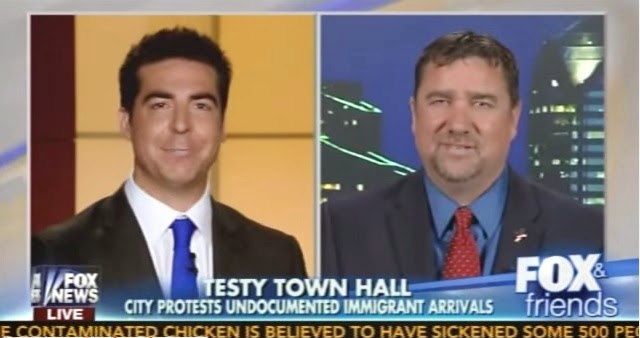 After the interview was over, while Doug was headed back to Murrieta in the car Fox News had assigned to him, a producer from Fox and Friends called him and asked if he could be on the show again, but this time with his legal immigrant wife, who was born in Mexico, and immigrated here legally as a child with her parents.  Doug and Virginia were on Fox and Friends the following Monday Morning, July 7, 2014.  Video HERE. 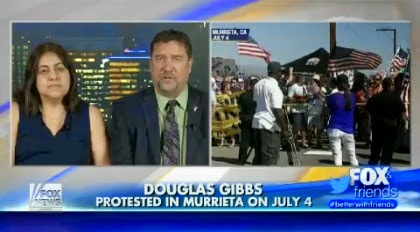 On Monday, July 7, Doug also appeared on Hannity, not as a guest, but in a clip Sean put on his show where Doug was interviewed by Fox News on July 4 (the same clip that alerted Fox and Friends about Doug's involvement) during the protest on Independence Day.  The clip also appeared on a number of other Fox News Channel shows.  Video forthcoming. 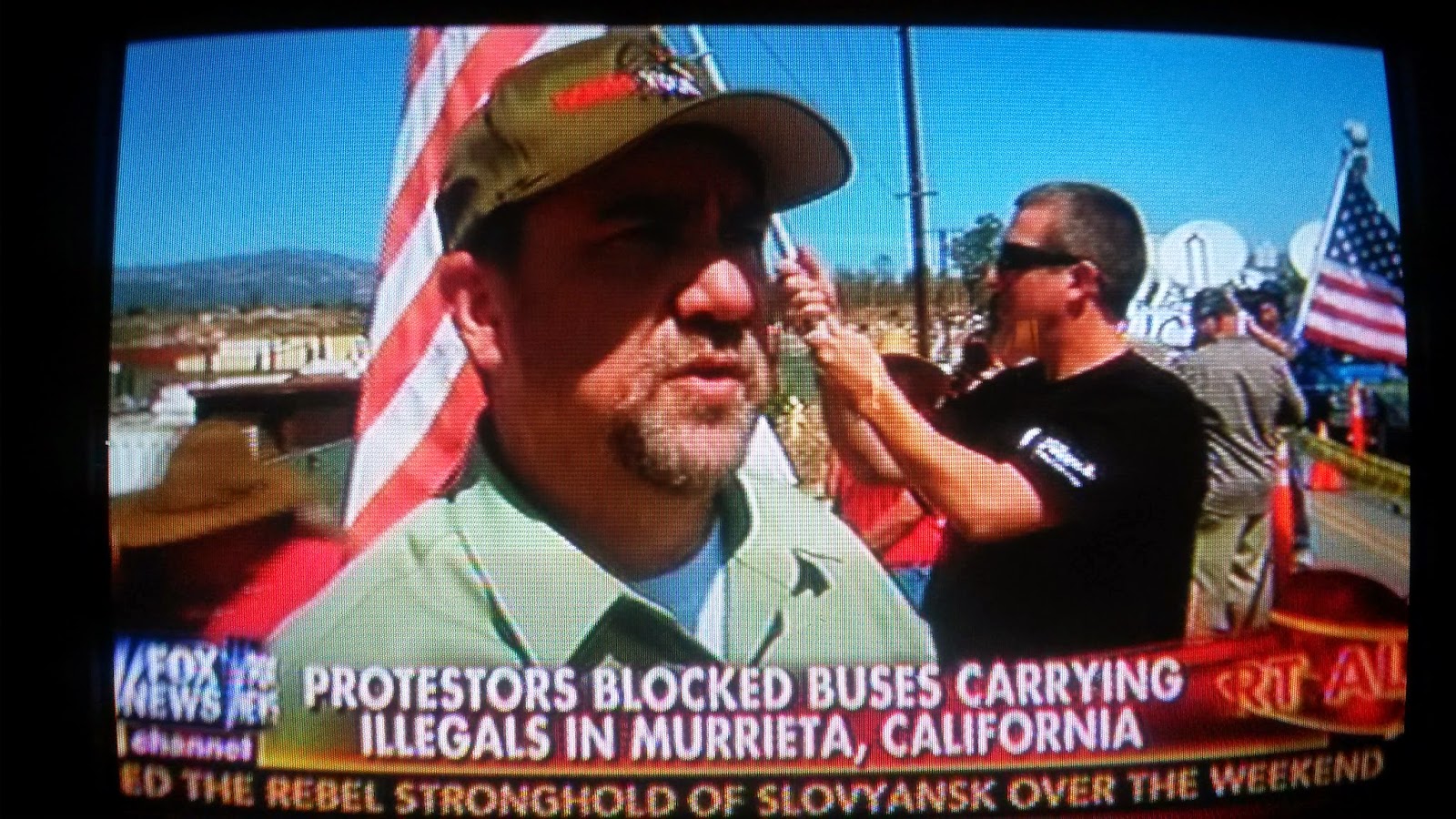 The following day, on July 8, Doug appeared on Hannity again, but this time as a guest to battle wits with an unarmed opponent who supports illegal immigration, Enrique Morones.  As you can see, the wind was having its way with Doug's hair.  See the video HERE. 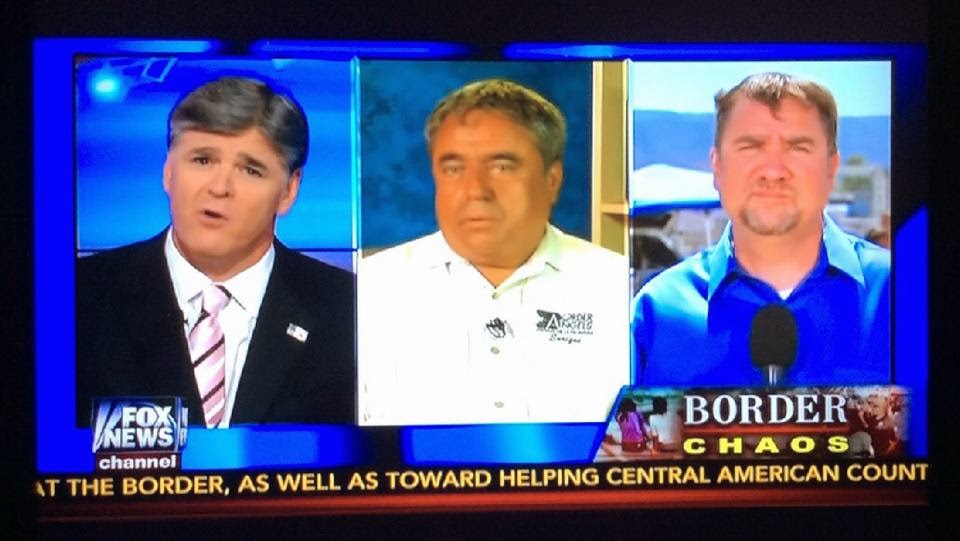 Al Jazeera America television asked Doug to be on the air on July 9.  The interview was confrontational, but Doug stuck to his main points regarding his wife being a legal immigrant and how illegal immigration is opening the door wide open at the border, making the admittance of these law-breakers unfair to people like Virginia who has gone through the process legally.  He also explained how, from a constitutional point of view, the immigration laws are in place to protect the receiving population and Doug's participation was primarily regarding the problem of incoming diseases, and the potential of criminals and terrorists crossing the border unimpeded.  Video is forthcoming. 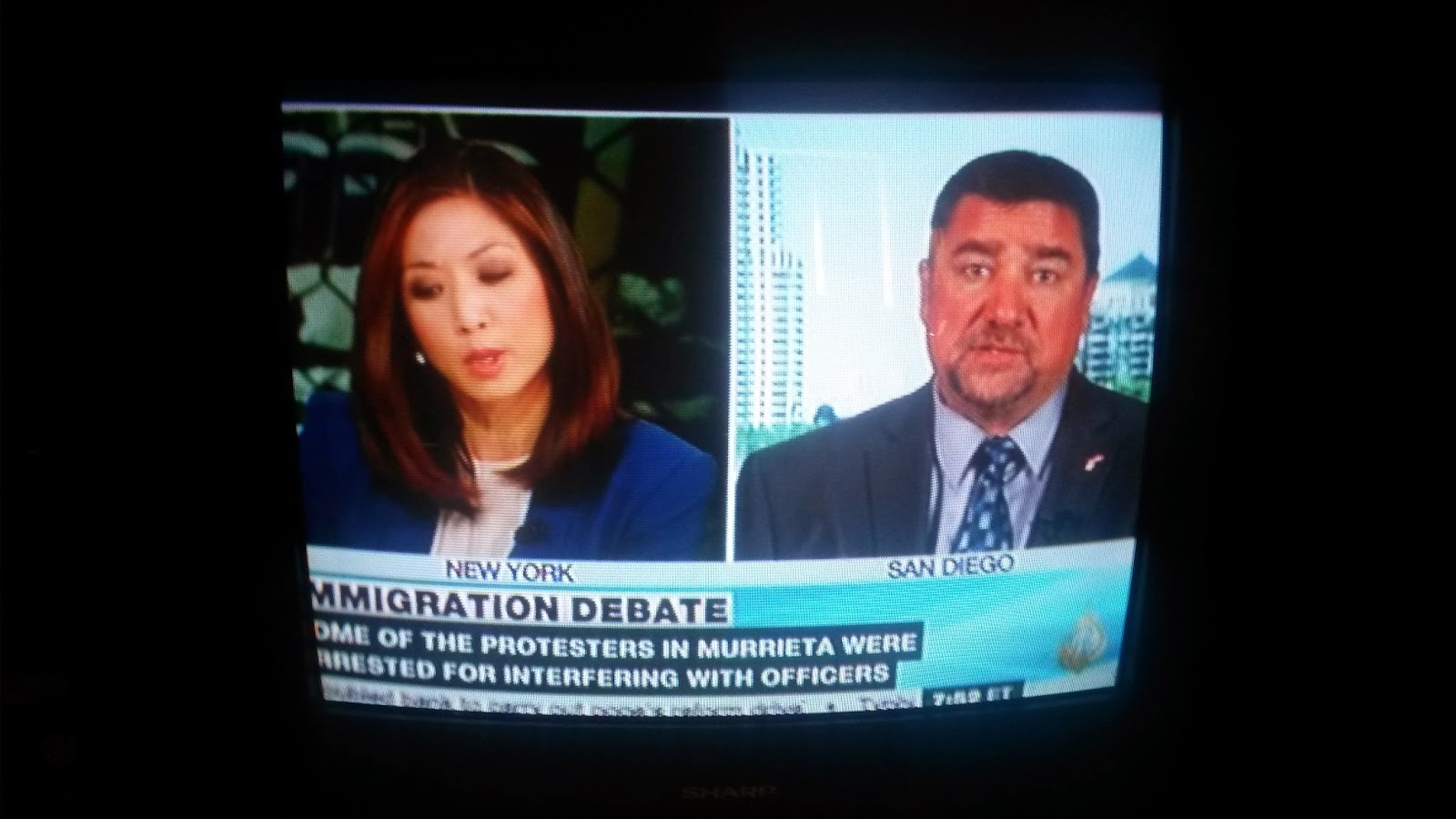 Prior to the national coverage, Doug also appeared on a number of local broadcasts for a dozen seconds at a time, including The CW Channel 6 in San Diego, and ABC 10 in San Diego.

Subsequently, Doug also performed as a public speaker at a number of events, as he normally does, but this time able to add the Murrieta Protests to his presentation.