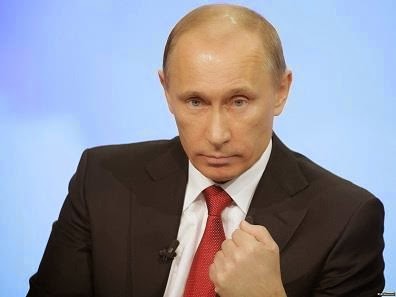 Russian President Vladimir Putin is on the march, not only in Ukraine as his "rebels" work to weaken Ukraine, and move the former Soviet Republic back into the Russian fold, but he is making deals to strengthen Russian influence over Eastern Europe, and to build alliances around the world, ultimately forming alliances with hard left communist enemies of the United States in Eastern Asia, as well.

Through a Natural Gas Deal with Russia, Hungary is strengthening ties with Russia.  Putin's deal allows Hungary to only pay Russia for the gas it actually consumes, as opposed to the volume it contracts, lowering costs for Hungarian authorities.  Hungary relies on Russia for 70% of its gas, supplied under a 20-year contract that expires this year.  The rest of the European countries that have any dependency upon Russian gas don't get the deal... yet.  The lesson to those countries is, "Play ball with Russia, and you can keep the lights on."

The defection of Hungary from the European united front against the Kremlin regarding Ukraine is a clear message showing Hungary's fellow European countries that "Hungary needs Russia.” From Putin's angle, welcoming Hungary back into Russia's sphere of influence helps the Russian leader's effort to dismantle Europe's stand against Russia over the Ukraine, and strengthen Russia's geo-political footprint.  Russia is also reaching out to Austria, France, and Greece, dangling Russian energy resources over them as an incentive to change camps, and stand against European Union sanctions against Russia.

The move is not a surprise, partly because Saudi Arabia's drop in oil prices has forced Russia's hand, and also because the hard left leaders in Hungary have shown that they are ready for an alliance with Russia as they have worked to centralize government power, rewritten Hungary's constitution, and have given heaps of praise for big government systems like Russia, as an inspirational model.

Hungary sits on a protruding corner along the western border of Ukraine, and though Hungary is a member of the North Atlantic Treaty Organization (NATO) and the EU, the willingness to step away from those post-Soviet associations is apparent.

Dependency on Russian energy also carries with it pitfalls, as Hungary learned in early 2009 when Russia turned off the flow of gas through Ukraine amid a spat with pro-Western leaders in Kiev.

The battle for Hungary is not over, though.  Germany remains Hungary’s number-one foreign trade partner and provides roughly a quarter of its foreign direct investment.  Germany's Chancellor, Angela Merkel, has had her political spats with Hungary's leader, Prime Minister Viktor Orban, though.  Earlier in February 2015, she visited Budapest, clashing Mr. Orban over his interpretation of democracy.

While Hungary has upheld European sanctions against Russia, Mr. Orban has criticized the strategy, stating that the European Union was “shooting itself in the foot.”

Despite the pressure being applied on Moscow by Europe, the war in Ukraine continues, recently culminating in a Ukrainian retreat from the town of Debaltseve.  Russian-backed militants took the town despite a cease-fire agreement signed in Minsk, Belarus.

Separatist leaders have insisted that the cease-fire agreement did not apply to Debaltseve, but no exceptions were mentioned when the deal was announced in Minsk.

As many as 8,000 Ukrainian soldiers were said to be in Debaltseve before the withdrawal.

Other arguments have declared the cease-fire was not yet in effect, and that it did not formally take effect until Sunday. There has been no real explanation regarding the decision to delay its implementation for about 60 hours.

Russia is trying to leverage the White House to get out from under what Putin is trying to do by attempting to grow his alliances, and that includes China and North Korea.  Putin is playing geo-politics. Russia is an international backer of Syria, and Iran. Russia has been supplying Venezuela with weapons as the President of the United States recedes America's power throughout the world.  Obama is leading with a white flag, and Putin is taking full advantage of America's decision to operate from a position of weakness.  America is pulling back, creating a global vacuum that tyrants are working to fill.  Meanwhile, Russia is becoming more and more brazen - the latest example a situation where Britain had to send warplanes up to intercept Russian bombers off Cornwall.  Russian bombers flying off he coast of Britain follows similar situations where last year and the year prior Russian bombers did the same off the coast of California, Alaska, the Gulf of Mexico, and Guam.