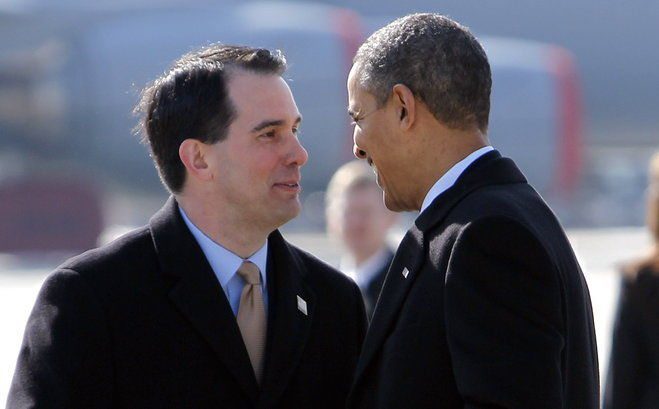 I'm not alleging that nobody else in the 2016 Republican presidential field would rescind all of Barack Obama's illegal, unlawful, unconstitutional Executive Orders and "memoranda"; I'm sure that Ted Cruz, Bobby Jindal, Rick Perry, maybe Ben Carson, and perhaps a few unspecified others (though NOT Jeb Bush) would do just that.

But I'm pretty sure no other GOP "hopeful" has come right out and baldly and publicly promised it:

Appearing on The Cats Roundtable on AM 970 in New York, Walker, who is considering a White House run, said the first three things he would do as president would be to pull out of Obama's "horrible" nuclear deal with Iran, reverse Obama's executive order on illegal immigrants and work with Congress to achieve reforms that "put power back in the hands of the states."


And his several dozen extralegal ObamaCare tweaks and his national water confiscation and all the other EPA power grabs of the past six-plus years and so much more.  I've long warned that any conservative successor to The One is going to spend his/her presidency digging out the country from under  the horrific damage - legal, political, cultural - that Barack Obama has done to it.  Even two terms won't be enough time for the magnitude of the undertaking; this will be the work of a generation, even if O leaves when he's constitutionally supposed to 599 days from now, given that Democrats will be bitterly resisting the healing every step of the way.

Not unlike the rabid, raging way they fought Governor Walker's Big Labor-breaking reforms in Wisconsin four years ago.  And yet he persevered, slayed the Leftist beast, pushed them through, and fiscally and economically resurrected his State....and launched, perhaps, a momentous presidency at a critical time in American history.

Oh, sure, I know, this isn't an Avengers movie.  There are no "supermen" (or superwomen).  Even Ronald Reagan, thirty years ago, only managed to buy America a decade's reprieve before it resumed its suicidal march towards the metaphorical waterfall (though the economic and national security benefits lasted a full generation).  As I say, truly and permanently changing the nation's direction away from statism and back towards constitutionalism and getting it back within the founding document's enumerated boundaries is the work of generations (if it's possible at all) and will likely entail national calamities that will make the (First) Great Depression and World War II look like a Sunday church potluck.  All of which illustrates that that work belongs to Us, The People, and isn't something that can be subcontracted out to any politician with a magic wand.  Hell, the latter is how we got ourselves into this mess in the first place.

But, as the saying goes, "a journey of a thousand miles begins with a single step".  And Scott Walker has proven, as nobody else in the 2016 GOP field ever has, that he can and will take those steps back towards the "new frontier" that the Founding Fathers first took 228 years ago - with a rocket pack in his hindquarters.