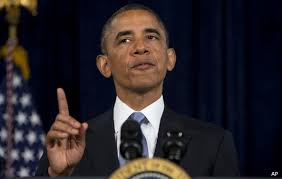 Barack Obama will reportedly unveil an overtime rule this week that could give raises to five million Americans.

According to Politico, Obama's proposal will raise the overtime pay ceiling from $23,600 to $50,440, meaning nearly all workers paid that much in salary will receive overtime pay if they work more than forty hours in a week.

Politico claims the White House will begin discussing the plan on Tuesday and Obama is scheduled to address it during a speech in Wisconsin on Thursday.

"This is absolutely one of the best practical ways to give people the on-ramp to the middle class," Democrat Senator Sherrod Brown of Ohio said in April. "When you strip people of their overtime pay, which is what's happened over the years, they really don't have a chance to get ahead: They're working harder and harder and not seeing real pay increases."

Brown is one of twenty-six Democrats in the Senate who have been pushing for the president to raise the overtime ceiling to $56,680.


Two points: (1) You cannot strip somebody of what they do not already possess; and (2) what the Democrats are attempting to do is strip private businesses of just about all their personnel and compensation decision-making authority, which they really do need in order to keep themselves in business and not be forced to layoff what employees they still retain.

A fact and reality that employers are screeching at the top of their outraged lungs today:

The National Retail Federation says Obama’s proposed rule change to greatly increase how many salaried employees can claim overtime would force companies to use more part-time and entry- level workers. Businesses also may offer fewer promotions and convert salaried employees to hourly to avoid raising their pay, the NRF said.

“The proposal is going to cost billions of dollars,” said Neil Trautwein, vice president for the NRF, the industry’s largest trade group. “It’s going to limit advancement opportunities, and ultimately it will reduce employee benefits.”


None of that matters.  All that matters is that "the working class" get lifted into the "middle class" that's been disappearing into the unemployment line for over six years on the spinal fluid, brain tissue, and bone marrow of whatever part of the once-prosperous private sector economy isn't already moldering in the grave.  And if the latter don't follow orders and cough it up, their officially-designated "greed" will be severely punished.

It's welfare state fascism, the feds forcibly commandeering private sector resources to public sector ends in order to bilk the votes of the target constituencies whose economic dislocation Obamanomics keeps securely in place.

Or, as the old saying goes, "misery loves company" - whether its sufferers like it or not.

It's not like We the People will be given a choice.