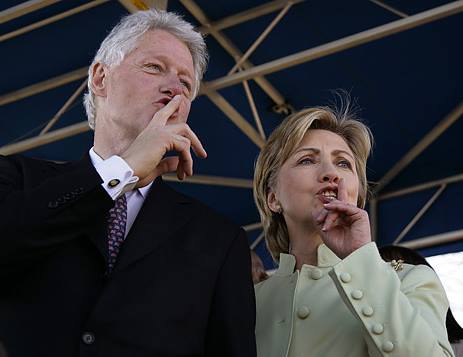 Four classified emails on the Empress's private email server became five and now have exploded into hundreds, as Congress was "warned" today:

The U.S. intelligence community is bracing for the possibility that former Secretary of State Hillary Rodham Clinton’s private email account contains hundreds of revelations of classified information from spy agencies and is taking steps to contain any damage to national security, according to documents and interviews Thursday.

The top lawmakers on the House and Senate intelligence committee have been notified in recent days that the extent of classified information on Mrs. Clinton’s private email server was likely far more extensive than the four emails publicly acknowledged last week as containing some sensitive spy agency secrets.

A U.S. official directly familiar with the notification, who spoke only on the condition of anonymity, said the notification of possibly hundreds of additional emails with classified secrets came from the State Department Freedom of Information Act office to the Office of Inspector General for the Director of National Intelligence. …

“We were informed by State FOIA officials that there are potentially hundreds of classified emails within the thirty thousand provided for former Secretary Clinton”....


Which is roughly half of the overall total number, recall, the rest having been preemptively wiped because she didn't deem it necessary for anybody else to read them.

“We note that none of the emails we reviewed had classification or dissemination markings but some included IC-derived classified information and should have been handled as classified, appropriately marked and transmitted via a secure server,” Mr. McCullough wrote the four lawmakers.


Like they need to be told that tens of thousands of emails all going through a private, unsecured server are going to have copious amounts of classified information and documents flowing through it "in the clear".  I realize that the IGs in their official capacity can only speak to the evidence they have at hand, but we all know that there were thousands of classified emails exposed in this fashion, not just hundreds, over a period of four years.  And it's only coming to light now, two and a half years after that.  That magnitude of national security damage cannot be "contained"; it cannot be imagined.  It's incalculable.

....and here's a spoon with which to put back the water.

But this wouldn't be a Hillary Clinton scandal if it couldn't still get even worse:

Hillary Clinton’s private lawyer has a thumb drive containing classified information from as many as five U.S. intelligence agencies — but the State Department told POLITICO the law firm is taking “appropriate measures” to secure the files. [emphasis added]


Note the present tense.  And that her long-time shyster is trusted with classified information on a small external storage device that anybody would walk away with, which he cannot possibly have full security clearance to have in his possession.  Not unlike how she conducted all her Libya intelligence gathering through Sidney Blumenthal instead of the CIA.  When you hear the tinfoil hatters and Fox Mulders and Alvin Kurtzweils talk about "the secret/shadow government," they're talking about La Clinton Nostra.

The agency declined to detail steps made to protect the sensitive information in attorney David Kendall’s possession....


Which means none have been or are being taken.

....but the issue is raising concern among Republicans on Capitol Hill who’ve criticized [Mrs.] Clinton’s handling of the email controversy. The thumb drive has copies of emails [Mrs.] Clinton kept on a private server while she served as secretary of state, a trove now known to contain classified documents.


For which he was criminally investigated and ruined, which will never happen to her majesty.


Which is also lying and stonewalling with all their might.  And how do we know that thumb drive is secure?  Because Hillary Clinton says so.  Trust her.  Just like she's assured us that her private server never had classified material on it at all, and then that the classified information she said her server didn't have that it did wasn't classified at the time it was on it, which, as I explained the other day, could only be the case if it was declassified, sent "in the clear", and then reclassified after the fact for no other purpose except to enable Mrs. Clinton to "truthfully" say that "My private server had no classified information on it".  Because she couldn't truthfully say that it "has" no classified information on it because she already had it wiped months ago.

And did I neglect to mention that every aspect of this entire caper is against the law?  Law which will never touch Her Nib, because she levitates serenely above it.

But her presidential dream?  That's another story.  And its denial will, for her, be a fate worse than any imprisonment.

Exit question: After the 2016 election, can we prosecute and jail her big, fat ass then?