First of all, he's a loser, not making it past New Hampshire.  Second, in his first round of Sunday shows since turning heel on his own party last Friday, Governor Goodyear didn't receive the kid-gloves/slightly starstruck/"knows he's really one of us" media treatment that his endorsee will be receiving for another couple of weeks until the roof falls in on him, but got fricasseed by George Stepanopoulos on ABC's This Week for the cowardly accordianing:

The mental image of the Big Show on his knees in front of an unzipped Donald is too mentally scarring, so substitute instead the picture of how a grilling with that much fat and grease released didn't ignite a fire that burned down the entire This Week studio.

What an ignominious end for the one-time Tea Party rock star, who made uncompromising, pugilistic "like it is"-telling his trademark, and now, six years later, he's reduced himself to nothing more than a big, fat, simpering, obseqious, dissembling toady; Herman Goering to Trump's Adolph Hitler (if you want to go Goddwin on it).  Absolutely pathetic.

And, yes, a coward, which Christie demonstrated by, yes, ducking his scheduled next appearance with Jake Tapper on CNN:

Following the noon endorsement on Friday, CNN announced that Christie would appear on Sunday’s State of the Union program with Jake Tapper, who has interviewed the governor several times in the past. But a source familiar with the matter said Christie’s camp grew concerned that Tapper was going to aggressively question Christie about Trump, and on Saturday night the governor bailed on the interview. This is unusual in the world of Sunday morning network news shows, and the Trump campaign offered the candidate himself in Christie’s place. (That led to an interview in which Trump refused to denounce a former KKK leader’s support for his campaign.)


Chris Christie, the man who built his reputation on getting in the faces of the opposition, now waddling away from the media that was going to, for once, do their jobs by asking him the questions he couldn't answer, because to answer them honestly would be to admit that he has royally and stupendously f'd up.  And that he is a coward and a quisling.

And his former co-partisans haven't been shy in pointing it out:

“It’s pretty disgusting why he did it, because he’s opportunistic,” said Tony Fratto of Hamilton Place Strategies, who worked in the George W. Bush White House. “His days of leadership in the Republican Party are done.”


His days in the Republican Party period should be done.

Fratto also brought up how Christie had previously criticized Trump for his anti-Muslim and anti-immigrant comments. “Did he mean those things, or is he a liar?”


That question has been answered.

Meg Whitman wasn't as witty, but nailed it nonetheless:

“Chris Christie’s endorsement of Donald Trump is an astonishing display of political opportunism. Donald Trump is unfit to be president. He is a dishonest demagogue who plays to our worst fears. Trump would take America on a dangerous journey. Christie knows all that and indicated as much many times publicly. The governor is mistaken if he believes he can now count on my support, and I call on Christie’s donors and supporters to reject the Governor and Donald Trump outright. I believe they will. For some of us, principle and country still matter.”


Trump no doubt promised him the attorney-general spot in exchange for this endorsement - everything, remember, is a deal to Trump.  And when Trump goes down in flames eight months from now, what will Double-C have to show for his supreme act of perfidy?  Who in the GOP, in public life, will trust him ever again?  He, and his fellow-travelers (like Alabama Senator Jeff Sessions). as George Will put it today, will find that "nothing will redeem the reputations they will ruin by placing their opportunism in the service of his demagogic cynicism and anti-constitutional authoritarianism."  Sessions just started his new Senate term, so he's got time to recover from this ignominy.  But Christie will be done.

But then what else can anybody expect of the man who struck up that famous bromance with Barack Obama under a week before the 2012 election that helped sink Mitt Romney's campaign at the finish line?

Christie's testicles shriveling yesterday probably caught Trump off-guard (and may actually help contextualize his demurral of repudiating David Duke), but does anybody believe that Trump differs from the Jersey dirigible's endorsement of the Obamunist position on the Scalia SCOTUS seat fight?  Criminy, connect the dots, Trumplicans. 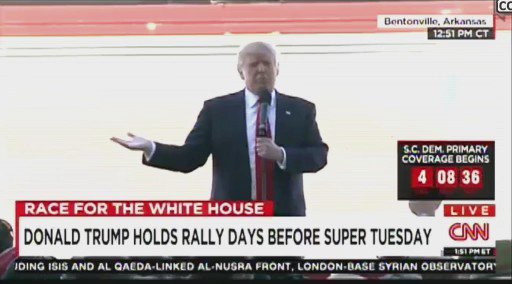 Benny
✔‎@bennyjohnson
My God.
This is Trump implying that the judge in the Trump U. case is against him because the judge is Hispanic.