The Enemy Of My Enemy

That's "Captain Mexico," in case you were wondering what the devil the more than a little ironic "M" on his headpiece meant.  Which is kinda stupid since the blue in his costume should be green in order to make this getup more recognizable as such [UPDATE: Just looked at this pic on my much larger monitor, and it is green, isn't it?  Whups, my bad].  That suggests to me that he actually made it for the couldn't-be-more-thematic-of-current-events Captain America III: Civil War debuting this coming Friday, and either didn't want to change it this close to the movie's premier or couldn't afford to change it on such short notice.  Which means he should have changed his nickname to "Captain 'Merica", which is probably how the Sokovian Wanda Maximoff (Scarlett Witch) pronounces it anyway.

Captain 'Merica was part of the already emblematic leftwingnut (a more precise and accurate adjective than the indiscriminate "anti-Trump") protests that are baying and howling after Donald Trump everywhere he goes in California, a State to which he is finally, belatedly paying attention, given that (1) Ted Cruz has a massive head-start on him there and (2) the still-likelihood that that is where the GOP primaries will be settled if they are before Cleveland this July.  And currently the California State Republican convention is concluding in Burlingame, near San Francisco, explaining his coiffed presence yesterday.and that of his ill-mannered "entourage".

The particulars are that to which I trust Captain Combover has grown accustomed:

Protesters — some of whom wore bandanas over their faces and carried Mexican flags — blocked off the road in front of the Hyatt Regency here, forcing the "GOP" front-runner’s motorcade to pull over along a concrete median outside the hotel’s back entrance. Trump and his entourage got out and walked into the building.


“That was not the easiest entrance I’ve ever made,” Trump said once he began speaking at the convention, adding, “it felt like I was crossing the border.”


In which direction, Donnie?  Certainly not this one.

At one point before Trump arrived, about two dozen protesters tried to rush barriers near the hotel. Police officers then rushed to the building’s doors, successfully blocking the protesters from getting in. Some of the doors’ handles were handcuffed from the inside so they couldn’t be forced open.


Several physical altercations, including shoving, could be seen between protesters and police officers, who were using batons to push them back. [end quote]


This guy was deliberately trolling in order to get the inevitable physical retaliation on camera for public sympathy-generation purposes, and thus not quite the victim as which he's attempting to portray himself.  In other words, he was trying to make himself the piñata.

Or, "following Trumpist precedent".  Which doesn't make it any less unacceptable when the fists are flying in the other direction.  In short, pro-Trump thuggery earlier in the primary campaign helped bring about leftwingnut thuggery like this, and it all needs to stop, literally, yesterday.

Besides, fisticuffs were hardly necessary for the protesters to more than adequately convey their sentiments about the object of their disapprobrious antics:


<YAWN>  If only life were as simple as "Anybody who disagrees with me must be a h8ter!"  Trump doesn't "hate" Mexicans - look at all the jobs he provides for them.

He does use them, though, as political props, which is why he kicked off his campaign over ten months ago by calling illegals "rapists" and "murders" before rhetorically circling back in his trademark passive/aggressive way and adding that "some" of them "I'm sure" are "good people".  Which was his hook for the touchback amnesty portion of his claimed immigration platform that he, strangely, never seems to talk about publicly.

It's much the same way that he uses mindless "progressive" mobs like this one, which are almost as Pavlovianly reactionary as his own supporters, and are firmly established - for now - as the clearly more insanely violent.


No, no, no, no.  Trump is not a "Nazi"; frankly, he's way too intellectually lazy to familiarize himself with all the tenets and doctrines of National Socialism, and he's way too much of a megalomaniacal narcissist to ever let himself be constrained to any label other than "Trump".  "Nobody controls Trump," remember?  Besides, as I keep trying to tell people, he's much more of an authoritarian fascist anyway. 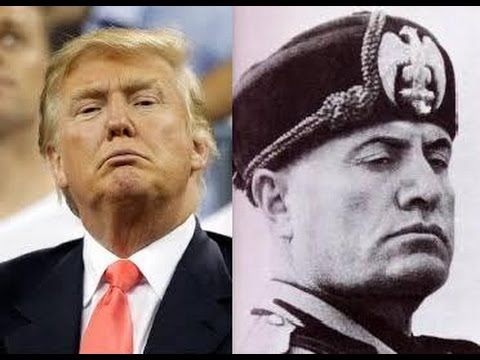 Is Trump a "racist"?  Not in the sense that his pursuing leftwingnut traveling circus of loony "performance artists" screech.  Because, again, it is not, and could not, be as, well, "black and white" as that.  As verbally incontinent as the millionaire slumlord is, he hasn't - yet, anyway - publicly used any racial slurs or uttered any sound-bitable phrases or one-liners that could be used against him in that sense.  It's much more of a gray area.  He doesn't call illegal aliens "wetbacks" or "spics" or "brownies," but he did, wittingly or unwittingly, suggest that most of them are drug-addicts, rapists, and criminals beyond just violating our immigration laws.  It may be that he realized how that sounded as it was coming out of his piehole, which is why he did that "and I'm sure some of them are good people" tack-on.  He doesn't send out white-supremacist Tweets on his Twitter feed, but he has re-tweeted the white-supremacist Tweets of his "alt-right" followers.  Does that make him a white supremacist himself?  Or simply an insecure megalomaniacal narcissist who doesn't want to lose a single vote, no matter how disreputable the source, and still confuses honor, morality, and human decency with "political correctness"?

Nuances within nuances, my friends.

If I were to characterize Trump on this question, I would cast him as a richer, better-dressed, nominally more urbane, twenty-first century version of Archie Bunker.

Both were/are from Queens, New York.  Both were brought up with culturally-ingrained but non-militant, harmless prejudices.  Both were/are too ignorant to realize how they sound at times and lacking the self-control to accordingly regulate their public speech and the inclination to mitigate said ignorance and exercise more verbal self-discipline (i.e. what Trump mis-identifies as "political correctness").  And both were/are, of course, wildly unfit for and unworthy of the presidency of the United States.

Plus, of course, both had/have an innate tendency to piss off hyper-triggerable leftwingnuts. 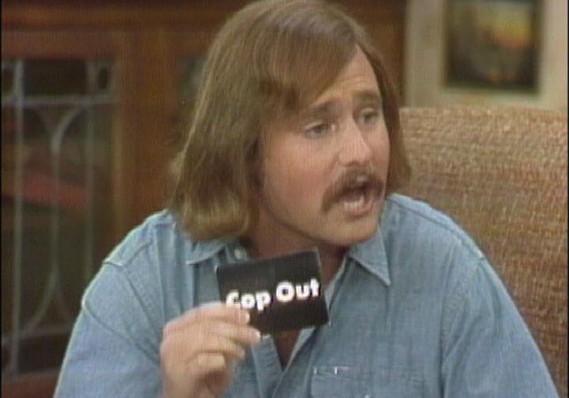 Which is why some borderline Trumplicans are being lured in the pompadoured prince's direction for the anticipated fall campaign on the bogus grounds that "at least Trump is better than Hillary".  A more generalized version of which is the old axiom, "The enemy of my enemy is my friend".

But there are exceptions to every rule, and this is one of them.

So, yes, the options are all bad — in the short term. But broaden your view beyond the race against Hillary, and the choice becomes easier: Will you sacrifice your integrity, your moral fiber, and your intellect for the sake of a single election cycle? A person who spends the next several months defending the indefensible, trying to make sense of the senseless, and excusing the inexcusable stands to do permanent damage to his reputation and the reputation of the movement he represents....

But there is also moral capital, and it’s far more fragile than its political counterpart. Once it’s squandered, even a lifetime of good works is often not enough to rebuild moral authority. God forgives the repentant, surely, but it is still often prudent for people not to trust them. And who will trust the moral judgment of those who ultimately choose to devote weeks and months of their lives to making an aggressively ignorant serial liar the leader of the free world? Trump is not the “best of bad options”; he is a cataclysm. If he defeats Hillary Clinton, his presidency will fail, and Republicans will suffer for a generation. If he loses, there’s a good chance he’ll turn the GOP into a shadow of its former self, a party reduced to holding only its safest seats and maintaining whatever political influence it still has through identity politics and clever gerrymandering.

The first step is to back Ted Cruz to the bitter end. Of course he’s not a perfect vehicle for the conservative movement; in many ways his own rhetoric has contributed to the present crisis. But there is a quantum difference between an informed, committed, and passionate conservative — whatever his faults — and a deceitful, Machiavellian liberal. Cruz is down to his Hail Mary pass, and conservatives should do all they can to help him succeed.

And if he fails, we should continue to clearly and consistently articulate our core convictions — and to reiterate as loudly and as often as possible all the reasons that both candidates will fail the American people. Neither Trumpism nor [Mrs.] Clinton’s unprincipled progressivism will do anything except exacerbate America’s structural divisions, long-term security challenges, and looming fiscal crises. Partnering with either candidate is like boarding the Titanic despite knowing it will sink. [emphases added]


Think of that fall campaign as a triangle.  In one corner is Hillary Clinton and the far Left.  In another corner is Donald Trump and his faux "populist", réal nihilist, authoritarian nationalist ("Make America great again") cult; and in the third corner is what's left of the Constitutional conservative movement, left without a candidate but standing on its principles - like a lot of ex-Tea Partiers-cum-Trumplicans used to before they gave into anger and despair and quit.

Yes, #NeverTrumpers are "anti-Trump", just as we are "anti-Hillary".  But our opposition to both is for the real, and right, reasons.

Because sometimes, the enemy of my enemy...is my enemy as well. 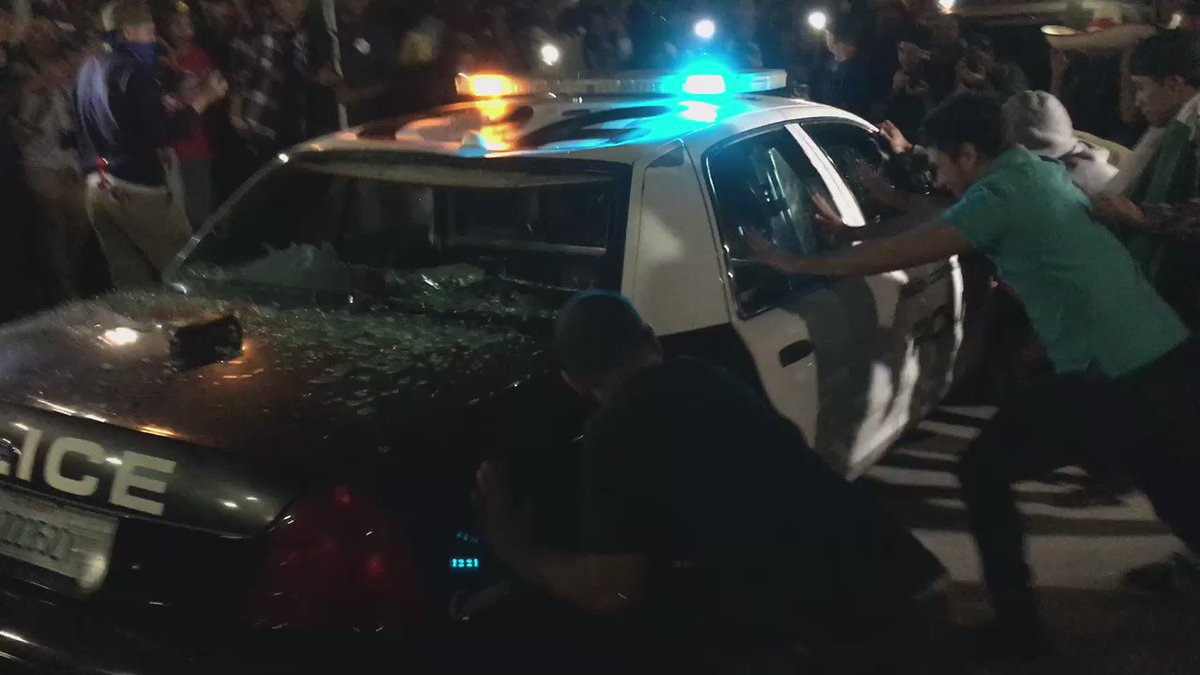 Jim Dalrymple II
✔‎@JimDalrympleII
From earlier, when protesters were trying to flip the police car 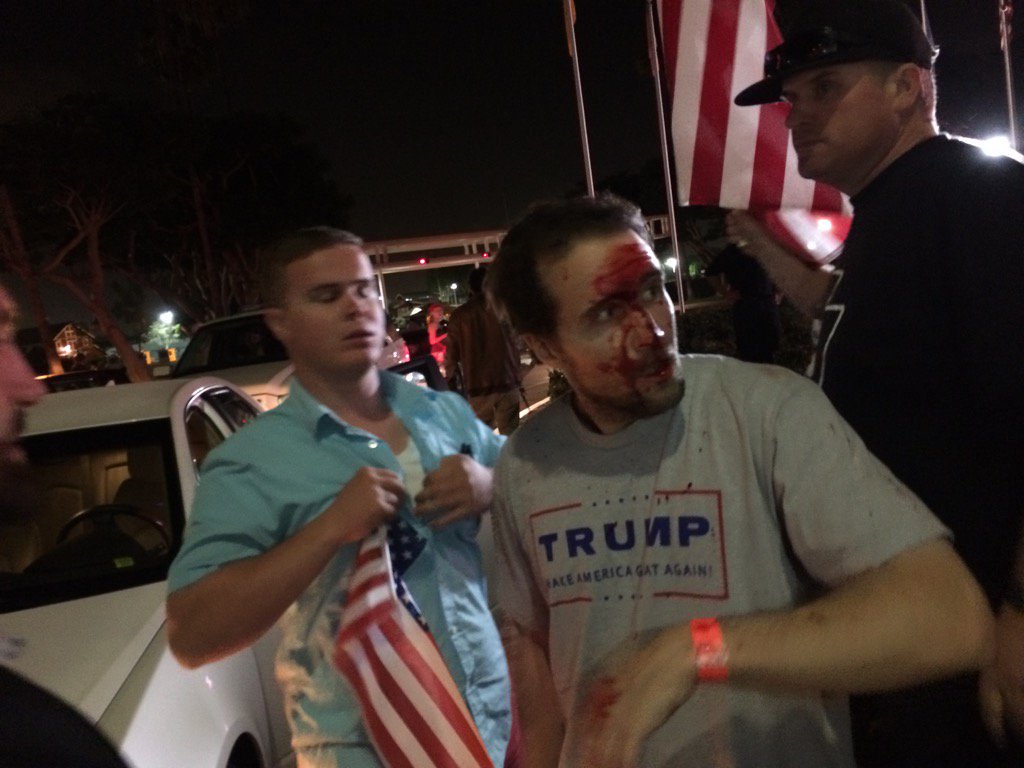 Let’s state this as plainly as possible: Nothing Trump has done justifies a violent response. Nothing. Yet the more the media whitewashes this violence and applies its typical double standard to left-wing thugs, the more the violence will escalate.

Clearly the media sympathizes with these Mexican flag-waving crowds in much the same way that it sympathized with the rioters at Ferguson and Baltimore. But when you excuse political violence, you tend to get more of it. We know leftist radicals aren’t shy about taking so-called “direct action” to intimidate opponents. We also know that at least some Trump supporters are spoiling for a fight. Trump himself has been spoiling for a fight. We risk the worst political violence in a generation. Am I wrong to believe that some in the media are thrilled at the prospect — so long as the Left is leading the charge? [emphases added]

“The First Amendment protects everyone’s right to speak. But you don’t have a right to threaten violence, you don’t have a right to shout down others, and these protesters appear to be trying to use violence and threats. These are the strategies of MoveOn.org, of the left-wing agitators, who try to silence a voice they don’t like. If you disagree with a particular voice, the way to deal with it is with civil discourse, with respectful discourse. You know, when I have protesters that’s how I deal with the protesters. Not inciting violence, not shouting people down, but engaging in civil discourse. And I think – to the extent these protesters are crossing the line to violence, and I haven’t seen much of the coverage today but my understanding is things have gotten pretty ugly out there – uh that is not appropriate, that is not acceptable to threaten violence as the protesters are doing. And they are entitled to express their own views but not in a way that is disruptive and muzzles others.”