The Cost of Socialism 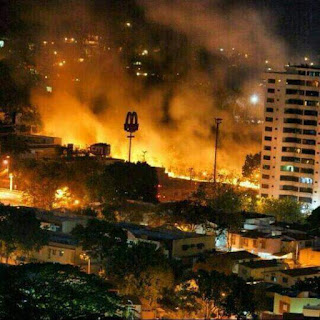 Venezuela is in flames as a result of the country chasing the lies of socialism.  Greece was the first of the European countries chasing the failure of socialism to collapse.  History provides example after example after example of the failure of socialism.  Anytime government is given more power over local systems it becomes an oligarchy, and anytime an oligarchy is in place the inevitable result is always collapse, death, and misery.  Such is the nightmare chased by the Democrat Party in our country.  Such is the platform of Bernie Sanders and Hillary Clinton in the 2016 Presidential Election.

To achieve their utopia, supporters of leftwing politics requires chaos.  Destruction of the old system so that they may rebuild a new one.  Dissent is discouraged, and eventually outlawed.  Language is used to silence the opposition, to defeat those who would dare stand in the way of the rise of a new system.  At first, dissent is shouted down.  Then, dissent is violently pushed down.  Eventually, dissent against big government becomes outlawed, and those who dare to continue to stand against socialism are rounded up, arrested, and eliminated.

Bumbling Bernie Sanders may not be capable of the kind of tyranny I am describing, but the system he believes in is.  Bumbling tools pass away.  The iron fist of tyranny is always inevitable, after those who believe they have the greatest of intentions are no longer the leaders of the party.

To achieve their socialistic utopia, the disruption of the current system is paramount.  Any argument against illegal aliens is labeled as discrimination against Hispanics.  Defense of traditional terms and institutions becomes labeled as discrimination against certain groups of behaviors that were once considered mentally ill.  Attempting to stand against the wholesale slaughter of babies in the womb becomes labeled as a war on women. Phrases and terms become outlawed.  Dissent becomes illegal.  The opposition to bigger government is silenced, and forced into the four walls of one's private residence, while it is still considered to be privately owned.  In the end, however, even privacy is outlawed.  Individuals can't be trusted with their own thoughts in the privacy of their own spaces.  They may think dissent.  And if their is dissent against socialism in a society, those people may act upon their thoughts.  Therefore, dissent cannot be allowed.

The liberal left progressives define their tyranny as justice.  Social Justice.  Economic Justice.  All dissent will be punished.  "If you are not with the program, you are against justice," they will tell you.  Who can tolerated anyone who stands against justice?

Socialism always results in the destruction of the previous system.  Democrats can cry out "Do you really think that can happen here in America?  Don't be silly!" all they want, but they forget that it was not their system of government that made America prosper.  It was a system of limited government that restrained the powers of the federal government that built this into the exceptional land that it is.  America became great because of the American System founded upon through the United States Constitution.  The cost of socialism has us in a downward spiral.  The influence of big government intrusion as prescribed by the Democrat Party has the United States on the ropes.  The Cost of Socialism, if we do not reclaim the American System, will be the same as it always has been in history.  Collapse.  Failure.  Misery.  Hunger.  The fires of violence and death.

Only a return to the godly values of our foundation, and a restoration of the United States Constitution in its originally intended form can keep the United States from suffering through the consequences of the rising cost of socialism.

-- Political Pistachio Conservative News and Commentary
Posted by Douglas V. Gibbs at 5:57 AM