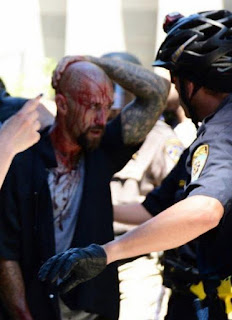 It should be clear to everyone that the riot had two sides which clashed with weapons such as clubs and knives, and that while one was permitted for a rally the other side showed up to physically rout the first from the location.

Everyone has some idea of what white supremacists are because every time one (or someone alleged to be one) sticks his head up the media extensively covers some activist group loudly deploring it, but who was behind the Sacramento riot, and even more so the activists behind the anti-Trump vigilantes instigating near-riots at Trump rallies, was unclear.

Before I heard anything else from the media, there was something about the Mexica Movement being involved, which probably has some truth to it due to a couple of guys at the event wearing T-shirts emblazoned “MEXICAN. NOT LATINO NOT HISPANIC” which is a primary component of Mexica Movement racial blather. Their slant is that “Latino”, “Hispanic” and “mestizo” is a social construction of “European invaders who raped and murdered” their ancestors. They claim to be “indigenous” (denying that the vast majority of their Spanish/Indian mixed blood ancestors migrated to the US post 1849, and not in any great numbers until after 1910). However, other raza ideology branches have a similar statement, with the emphasis that “Latino” and “Hispanic” denote “vendidos”, sellouts against the brown ethnic nationalist cause.

Then I heard the narrative by Yvette Felarca, activist middle school teacher and apparent spokesman for the group “By any means necessary”, or BAMN. That perked my ears, because the phrase “by any means necessary” is a pervasive part of Brown Beret raza rhetoric, and this BAMN group appears to be a primary organizer of opposition to the TWP and GS Skinhead rally.

However, on further investigation it turns out that BAMN is an academic activist organization around since 1995 or so dedicated to – get this – organizing K-12 and college students for ideological activism. The same people who participated in organizing a large group to aggressively confront and physically mix it up like a street gang against a permitted free speech event, vile as the free speech may be, are primarily public school teachers. The rational is probably “hate speech violence” is the same as physically applied violence, so objectionable speech must be countered with a wielded club. And, BAMN probably borrowed what eventually became their name from the Brown Berets. The multitudinous Raza groups swim in the same swamp, and quite a few of the swimmers are accredited educators.

Another group which organized with BAMN for the Sacramento riot is Antifa, short for Anti Fascist Front. At this time, I don't have much info on that group. Here's a link for them organizing the counter protest: