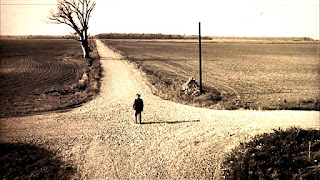 I am a Reagan Baby, meaning that the first election I was old enough to vote in was during the eight years Ronald Reagan was President of the United States.  I was born and raised in California, so Reagan's legacy in California was still alive and well when I first voted in 1984.  Aside from voting Democrat during World War II to keep Franklin Roosevelt in office, and going with Lyndon B. Johnson in 1964 during an election in which even God couldn't beat the incumbent because he was getting the sympathy vote, California had a long and illustrious history of voting Republican.  That changed in 1992, thanks to the State being flipped by amnesty during Reagan's second term.

California has gone blue every presidential election since.

We have had some critical elections in history.  Jefferson's narrow victory in 1800 ended the big government reign of the Federalist Party, a political party that faded into obscurity by the 1820s.  Lincoln's victory in 1860 led to the secession of the Southern States, and set the stage for the War Between the States.  In 1904 the onslaught of socialism over the prior two decades finally began to reveal itself in the major parties.  The Democrats were on their way towards progressivism, and the Republican Candidate, Theodore Roosevelt, considered himself to be a progressive, though not as extreme as the Democrats, as well.  The election resulted in Roosevelt's win, and launched what would become known as the Progressive Era.  The 1912 Election placed progressive reform at the forefront.  To stop Taft's more conservative economic policies, and to get the man, Woodrow Wilson, in office who promised he would sign the Federal Reserve Act, Roosevelt ran on the Progressive Party (Bull Moose party) ticket to split the Republican vote.  Under Wilson the progressive amendments regarding income tax (16th) and stripping the States of their equal suffrage in the Senate (17th), along with the Federal Reserve Act, went into law in 1913.  During Wilson's second term we also saw the eruption of a world war - a war that during the 1916 Election Wilson had run on keeping the U.S. out of.  Progressivism was thrown out of the Republican Party in the election of 1920, leaving the socialist policies to the Democrats.  Harding, a staunch conservative, along with this running mate Calvin Coolidge, won decisively, revealing that the American People, at least for a moment, had rejected progressive policies.  Calvin Coolidge won easily in 1924, keeping conservative policies in place, and continuing the very prosperous Roaring Twenties.  In 1928, running on the popularity of Coolidge, Republican Herbert Hoover won the presidency, keeping the Grand Ol' Party (GOP) in office.  Hoover, however, was not as conservative, and a year into office was slammed by the Great Depression - an economic collapse caused by the overprinting of currency by the Federal Reserve, and worsened by the Smoot-Hawley Tariff Act.  Hoover's dismal presidency opened the door for the progressives to get back into the White House in 1932, launching the presidency of Franklin Delano Roosevelt that would span over a decade, and introduce the New Deal (which extended the Great Depression in the United States by seven years) and send United States Troops into a second World War.  The Election of 1960 saw flair and celebrity enter the equation, and the start of the short presidency of John F. Kennedy.  After Kennedy's assassination, Johnson, who took the office of President after Kennedy's death, won easily in 1964.  The Republicans, however, held on to Congress, and were instrumental in ensuring the passage of Civil Rights legislation, despite Johnson's early opposition to it.  Once Johnson reluctantly signed the Civil Rights Act that had been called for by Kennedy, and written by Congressional Republicans (a bill that had also been filibustered against by the Democrats, and weakened in committee by the Democrats in order to make it more palatable for the racists of the Democrat Party), Johnson realized the importance of giving gifts from the treasury to blacks in order to get their votes, and launched his "Great Society" programs.  Weary of the Vietnam War, and Johnson's progressivism, the American People narrowly elected Richard Nixon in 1968.  Nixon ran on "law and order," in the midst of the civil rights and anti-war protests, and on ending the Vietnam War.  He won by a landslide in 1972, bringing home the troops in 1973, and ending the war in 1975.  The Republican Party, marred by the Watergate Scandal in 1972 and the Resignation of Nixon in August of 1974, the Democrats won in 1976 with their candidate, hard left progressive Jimmy Carter.  After a disastrous Carter Presidency that included economic chaos and an Iran Hostage Crisis, conservative Republican Ronald Reagan won in 1980.  Despite worries that a conservative could not win, he not only won in 1980 quite easily, but nearly won every State in 1984.  Ronald Reagan's conservative policies resulted in prosperity, and sent a signal to progressives that progressive policies are a failure, and that conservatism can win elections.  In order to win in 1992 and 1996, progressive Bill Clinton had to moderate his campaign promises so as to not seem so far to the left.  Daddy Bush in 1988, and his son George W. Bush in 2000 and 2004 returned the Republican Party to less conservative domestic policies.  The Democrat Party used their opposition to the War on Terror in Iraq, and an untruthful accusation against Bush's tax policies being the cause of the 2008 economic crash to put Barack Obama into the White House after the 2008 Election.  The first black president was reelected in 2012, despite heavy opposition from the right of center Republicans who have labeled Obama's reign a failed presidency.  In fact, Obama has turned out to be the most progressive Democrat in the White House in history.  His administration has repeatedly circumvented the United States Constitution with executive orders (letters, memos and actions) and international agreements (labeled as such, rather than treaties, in order to unconstitutionally avoid oversight by the U.S. Senate) and has placed the United States in a very vulnerable position both economically, and in terms of national security.  The untruths put out by the mainstream media about his administration being successful has been believed by the less informed members of the voting public, and now America is at a crossroads in 2016.  Do we head in an even more progressive direction with Hillary Clinton with an all important Supreme Court Justice nomination that could set back conservatism a hundred years if Clinton nominates a fifth progressive to the bench (to replace the now deceased Scalia), or do we elect billionaire businessman Donald Trump who may not be a conservative or constitutional champion, but his presidency would hold off the Democrat's effort to silence all opposition, and dominate to the point of turning the United States into a one party system (for now)?

As I have shown in the above brief history of critical presidential elections, this is not the first time an election has been very critical. . . but it is the first time we, as a nation, are faced with the danger of losing the American System, losing our republic as originally intended by the Founding Fathers for decades (if not a century), to an ultra-left progressive presidency.  A Hillary Clinton presidency would, after she got her fifth Supreme Court Justice in place, have carte blanche because the federal court system (already dominated by liberals at about 70% in the inferior courts) would deem everything she did as being constitutional. . . despite the truth being to the contrary.  I believe we would see the third rise of a Sedition Act, in which one could be arrested for speaking out against the government.  Her Keynesian economic policies would finish off our already unsteady economy, and her globalist positions would deconstruct America's position in the world as a superpower.  A massive open border and amnesty policy would wipe out any chance for Republicans to win in the future, and I wouldn't be surprised if her administration eventually just outlawed the Republican Party and labeled it as a hate group. Religious freedoms would be devastated at the hands of the homosexual agenda, gun rights would be abolished through massive unconstitutional federal gun control legislation, and the last of our rights enumerated in the legal amendments (4-7) would be in grave jeopardy.

While we have seen some very critical elections in our short history as a country, it is my belief that 2016 is the most pivotal of all of them.  A Clinton win may very well mean an end to the American System as we know it, and may take a hundred years to recover from.  Are we prepared to let that happen?  Are we prepared to tell our children and grandchildren in the future what America once was like when it was still free?

As Reagan told us, we are only one generation from losing our liberty.  Each election is critical, but 2016 may be the most critical, yet.

As for you Republicans who call yourselves "Never Trump", a vote for no candidate because you have a problem with Trump's less than perfection as a conservative (and his lack of political knowledge, although he is showing that he is a quick study) is a vote for Hillary Clinton - and a vote for one hundred years of political darkness, chaos, and collectivism.

For those of you in the Inland Empire area of Southern California we will be meeting to discuss this election on Saturday Night in Menifee, 5:00 pm, and we (Constitution Association) will be handing out voter guides.  http://constitutionassociation.yolasite.com/ca-monthly-meeting-flier.php 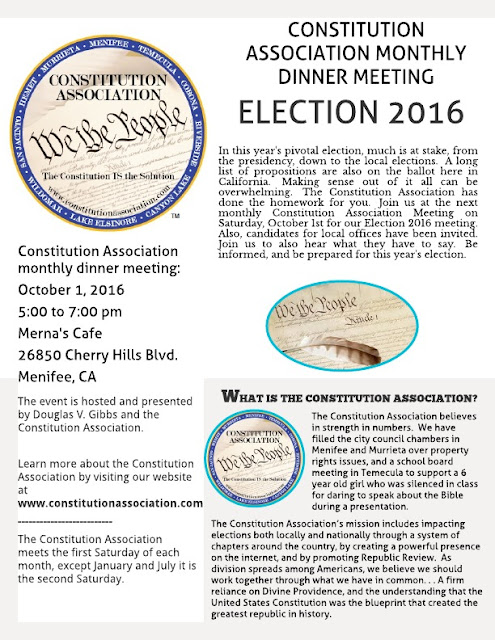