A New Hope in America, Contrary to Michelle Obama's Opinion 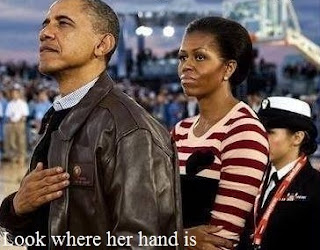 Michelle Obama paid a visit to Oprah Winfrey on television, and during the interview the First Lady revisited her attitude of not being proud of being an American, unless her husband is in the presidency - or at least unless a hard-left liberal socialist commie is President.  Donald J. Trump is not what the democrats consider a good fit for America's transformation towards totalitarianism.  In fact, he is so against the Democrat Party's goals for a socialist America that Michelle told Oprah that people are feeling a loss of hope in regards to America's future.

Mrs. Obama said, “Now we’re feeling what not having hope feels like.”

Trump, at a rally, had no problem responding to the verbal elucidation of Michelle's true feelings.

“Michelle Obama said yesterday that there’s no hope,” he said. At the mention of Mrs. Obama’s name, boos rose from the crowd.

He was careful to ensure nobody thought he was personally attacking the character of Michelle Obama, adding that when he and his wife Melania visited the White House after the election, “She could not have been nicer.”

While Trump also suggested it is possible her words may have been misconstrued, the reality is we have heard Michelle's negativity before.  She's a Marxist, and anything less than full government control is a call for pessimism from her point of view.

Besides, she revealed her contempt for the potential of a Trump presidency at a Hillary Clinton campaign event in October.  Mrs. Obama said, “It has shaken me to my core in a way that I couldn’t have predicted.”

I think it is safe to assume the Obama couple shares with the Clintons a full belief in a quote made by Karl Marx, the father of communism:

"The meaning of peace is the absence of opposition to socialism."

-- Political Pistachio Conservative News and Commentary
Posted by Douglas V. Gibbs at 10:41 AM