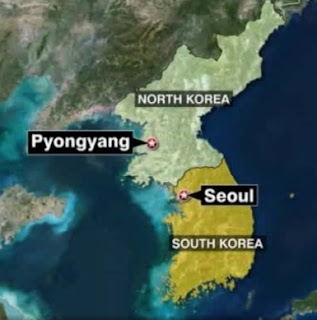 Americans are not in North Korea often, but when they are, they are at risk of being detained.  One could say the same about the Middle East.  I have a friend who visits Iran twice per year.  His family still lives there.  He has to be careful, however.  He can't be completely truthful while there, even to family members.

In North Korea, one such person has been detained for unknown reasons, as he was ready to depart at Pyongyang International Airport.

The detention was confirmed by Martina Aberg, deputy chief of mission at the Swedish Embassy in Pyongyang. The embassy represents US interests in North Korea, since Washington and Pyongyang do not have direct diplomatic relations.

"He was prevented from getting on the flight out of Pyongyang," Aberg told CNN. "We don't comment further than this."

The US State Department on Sunday said it was working on the case.
"We are aware of reports that a US citizen was detained in North Korea," said a department official. "The protection of US citizens is one of the Department's highest priorities."
The detained American is a professor, according to South Korea's Yonhap News Agency.
At least two other US citizens are known to be currently in North Korean custody.
Otto Warmbier, 21, a student at the University of Virginia, was detained at Pyongyang airport on January 2 last year after visiting the country with a tour group. He has since been sentenced to 15 years of hard labor for allegedly removing a political sign from a hotel wall.
Kim Dong Chul, a naturalized US citizen of Korean origin, was arrested on October 2015. Last year, North Korea sentenced him to 10 years of hard labor on espionage charges.

Since 2013, at least two other US citizens and a British journalist have also been detained for shorter periods and then released.
All of them were grabbed by North Korean security forces as they attempted to fly out of Pyongyang airport.

-- Political Pistachio Conservative News and Commentary
Posted by Douglas V. Gibbs at 11:44 AM