Trump's Idea About Dismantling 9th Circuit a Good One 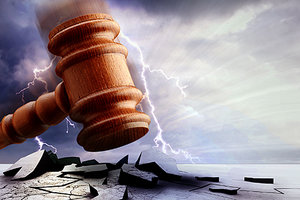 In Article I, Section 8 of the United States Constitution the text states that Congress has the authority to "constitute Tribunals inferior to the supreme Court."

In Article III of the U.S. Constitution, when referring to the inferior federal courts, it states that it is Congress who may from "time to time ordain and establish."

With the power of creation comes the power to dismantle.

The leftist activist judges have been ruling unconstitutionally based on their ideological beliefs, rather than applying the law to the cases they hear.  In response to their illegal rulings, of which the courts have no authority to enforce, President Trump said he is considering proposals that would split up the 9th Circuit Court of Appeals.

First came the attacks against his travel ban, despite the fact that Article I, Section 9 gives Congress the authority to prohibit persons from migrating into the United States for any reason, and his executive order referenced those immigration laws he was delegating down to the executive branch agencies, the federal court system claimed he couldn't because, in short, his travel ban was "mean."

Now, U.S. District Judge William Orrick has temporarily blocked Trump's efforts to withhold funds from any municipality that refuses to cooperate with immigration enforcement officers.  According to Orrick, Trump had overstepped his authority when he directed the Justice Department to put immigration-related conditions on grants for so-called sanctuary cities that may not be directly related to law enforcement. The case, if appealed, would go before the 9th Circuit.

Fascinating.  I seem to remember the Democrats using the threat of withholding federal funding as a way of extorting the States a number of times in history. About a year ago congressional Democrats threatened North Carolina Governor Pat McCrory of taking away federal funding for the State's education, transportation and health programs because of North Carolina's law refusing to obey Obama's demand regarding "gender neutral" bathrooms in schools.  The Obama White House announced that it wouldn't pull federal funding once North Carolina responded that they would take the federal government to court.

When it comes to the judicial branch's lack of enforcement authorities, Trump can simply ignore the courts.  What are they going to do?  How would they enforce their rulings?
Regarding sanctuary cities, Article VI. of the United States Constitution, in the Supremacy Clause, it states that laws contrary to constitutional U.S. laws are unconstitutional, and the judges "shall be bound thereby."

In short, the sanctuary status laws are illegal.  The sanctuary cities have no legal leg to stand on, from the point of view of constitutionality.

That all said, dismantling the 9th Circuit Court is doable, but not by the executive branch.  If the judges need to be removed from their seats, and the court dismantled, the Congress would have to initiate the move with legislation.

In Article III's Exceptions Clause, the Congress also has the authority to use legislation to make null and void unconstitutional rulings.  One wonders why they haven't used that tool, instead.

If one reads the Constitution, and understands the history of the courts, we realize two things.  First, the judicial branch was originally supposed to be the weakest branch of the three, not the strongest.  Second, among Congress's jobs is to be a check against the courts, the courts are not supposed to be a check against the President or the Congress.  The checks against the executive and legislative branches are supposed to be the States, and We the People.  In short, all of these rulings by the court against Trump's executive orders are an overstepping of their judicial authorities.  The judges are acting illegally.