Broken Hard Drives IT Raid Leads Back to Clintons 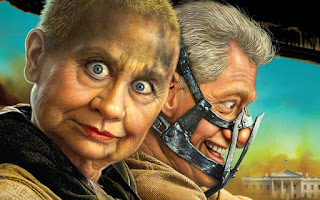 More evidence regarding the Democrat Party's mafia-style tactics and "hide the evidence" tendencies led to the discovery of broken hard drives at the house of a Democrat Party IT guy (who also happened to be Muslim).  Trying to flee from the country, the individual has been arrested.

Now, the whole thing is adding up in interesting ways, and it is leading right back to the Clinton Crime family.

The IT Muslim Democrat deceptive guy with broken hard drives who tried to leave the country is Imran Awan.  Awan's lawyer is Chris Gowen.  Gowen is a longtime campaigner for former President Bill Clinton and former Secretary of State Hillary Clinton and a member of an attorney team that brought a fraudulent lawsuit against energy giant Chevron Corp.

In short, one of the Clinton's criminal buddies who has helped the Clintons in their criminal enterprises is now involved in defending Awan and his Islamic family members against allegations that they abused their access as congressional information technology administrators for dozens of Democratic members of the House of Representatives, including the former Democratic National Committee chairwoman, Rep. Debbie Wasserman Schultz of Florida.

While the computer mayhem is expected by the criminals of the Democrat Party, the Muslim and Clinton link tells us our deep and traitorous the whole thing truly may be.

Gowen described Imran’s arrest as “clearly a right-wing media-driven prosecution by a United States Attorney’s Office that wants to prosecute people for working while Muslim.”

Gowen's service as a traveling aid for President Clinton’s national and international trips, and as the person directing the advance operations for then-Senator Hillary Clinton during her 2008 presidential campaign, Gowen's connections to the Clintons shows how desperate the Clintons are to cover-up and kill investigations into the Democrat Party.  This writer believes their fingerprints are all over everything illegal and corrupt in the Democrat Party, and that if discovered, how deep the criminal activity by the Clintons and their Democrat minions goes will destroy the political party forever.

While some Americans may buy into the Democrat Party's leftist message, they will not stand for the kind of lying, deception and criminal activity I believe the Democrats to be guilty of.

Conservative Review, which first reported Gowen’s extensive Clinton connections Wednesday, said they also include work for the Clinton Foundation and its Clinton Global Initiative and the Clinton Health Access Initiative.

If he doesn't perform his job right, the Clintons will have no problem doing what they do to all of their connections they think may not be up to snuff. . . by snuffing him out.

-- Political Pistachio Conservative News and Commentary
Posted by Douglas V. Gibbs at 8:19 AM