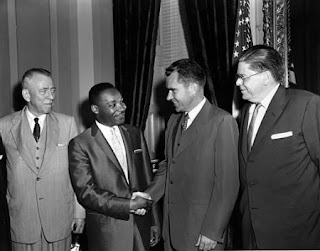 Equality is a Marxist construct.  When the Declaration of Independence states that all men are created equal, the phrase means equality in the eyes of God, not in the eyes of men.  So, we must ask ourselves a question.  Do we seek equality based on man’s definition, or God’s?

Instead of equality, how we focus on equity.  We have been convinced that if there is not an equality in results, we are racist or bigoted.  Should equality apply at the start of the race, or at the end?  Should an A student give up part of the grade he or she worked hard for so that an F student can enjoy equality in the classroom?

A society cannot practice liberty and man’s definition of equality simultaneously.  Equality seeks communitarianism.  Collectivism demands equality, and calls it civil rights.  Are "rights for equality" denying the reality of the system of liberty established in the United States?

The drive for equality should not be about forcing the culture to be color-blind, but to remove government from the culture so that we may strive to be self-reliant, personally responsible, and successful without governmental regulations forcing upon the citizenry their idea of collectivism, and without allowing the politicians to use social engineering through laws that promote preferential treatment, quotas, or limit our opportunities to reach for the incentives offered by a free market economy, regardless of who we are.

In other words, the greatest threat to our liberty to be who we are is a government that believes it is its job to guarantee equality so that we can force society to treat us in a manner that we may not be.

The political opponents of the U.S. Constitution use terms like "fairness" and "justice" to promote their call for a collective, homogeneous society.  They reference the Declaration of Independence's language calling for the idea that "all men are created equal" without understanding what the phrase truly means.  On the surface the call for "fairness" and "equality" sounds wonderful, but the reality is that these concepts actually propose a society that is the opposite of what our American system of government was designed to promote.

Biblical concepts of individualism and free-will are intertwined with the principles of liberty we find in the founding documents of the United States.  Our natural rights are God-given, and the concept of having an individual right to own property so that we may be fruitful as a result of our labors is biblical.  A free society requires that we have private ownership, and that our possessions are to be obtained as a result of our individual labors.  The Bible states, "Thou shalt not covet" and "Thou shalt not steal," confirming the concept of ownership.  Ownership requires individual assertiveness and innovation to be able to obtain the property.  A society that refuses to adhere to the commandments of Heaven, which includes liberty and the pursuit of happiness, becomes chaos. A society that eliminates the right of private property ownership becomes a tyranny.

When governments call for "fairness" they are calling for equity.  God, however, made each of us different from each other.  We are not the same, nor were we ever intended to be so.  The reality is that in a free system where our own individual skills and drive fuel our journey towards success or failure, there will be winners and losers.  There will be those who become wealthy, and those who don't.  For those who lose, however, in a truly free society those people will still have the opportunity to try again, without government interference, without government control, without government regulation.

In a communist system the concept of equality is front and center.  On the surface they proclaim it to mean that all men should be an equal king, but the reality is it means that all men should equally be peasants and slaves, save for a few who are politically powerful and wealthy and must rule with an iron fist so as to stamp out any momentary emergence of individuality, or independent thoughts of having hopes and dreams.

The goal of those calling for equality as defined by man is to make irrelevant all remnants of individuality, be it the individual sovereignty of the States, to the ability of the individual to influence their system through a representative government.  If the individual can be convinced that their individuality is a danger to their own happiness, they will be willing to relinquish their individualism, and hand over the keys to their pursuit of happiness to the government where a life of mediocrity is preferred. After all, being an individual can be a lot of hard work. As individuals, we work at a thankless job, pay payments on a massive mortgage, and balance the checkbook with not enough money in the coffers. These distractions, we are convinced by the statists, interferes with life.  The life of mediocrity is taught to be real freedom, when it is founded upon a desire for equity.  Anyone who desires more than a life of mediocrity orchestrated by a government that encourages dependency is then considered greedy, and must be brought down to the level of everyone else.

Freedom, after all, is considered to be selfish, according to the Marxists.  Saul Alinsky, a Marxist radical, wrote, “The greatest enemy of individual freedom is the individual himself... People cannot be free unless they are willing to sacrifice some of their interests to guarantee the freedom of others. The price of democracy is the ongoing pursuit of the common good by all of the people.”

As Senator, Hillary Clinton said while talking to a group of wealthy Democrats, “Many of you are well enough off that … the tax cuts may have helped you.  We’re saying that for America to get back on track, we’re probably going to cut that short and not give it to you.  We're going to take things away from you on behalf of the common good.”

Another time during an economic policy speech in May of 2007 she said, “It’s time for a new beginning, for an end to government of the few, by the few, and for the few.  Time to reject the idea of an 'on your own' society and to replace it with shared responsibility for shared prosperity.  I prefer a 'we're all in it together' society.”

On July 13, 1813, John Adams wrote, "Inequalities of mind and body are so established by God Almighty in his constitution of human nature that no art or policy can ever plane them down to a level.  I have never read reasoning more absurd, sophistry more gross, in proof of the Athana­sian creed, or transubstantiation, than the subtle labors of Helvetius and Rousseau to demonstrate the nat­ural equality of mankind.  Jus cuique, the golden rule, do as you would be done by, is all the equality that can be supported or defended by reason or common sense."

Helvetius and Rousseau were utopianists who were important cogs in the launch of the brutal and godless French Revolution that sought a "we're all in it together" kind of society that Mrs. Clinton called for, but instead wound up with a bloody totalitarian system that still haunts France to this day.

On April 15, 1814, John Adams wrote to John Taylor of Virginia, "Inequalities are a part of the natural history of man. I believe that none but Helvetius will affirm, that all children are born with equal genius."

We are all born equal in the eyes of God, therefore we are equal in our possession of Natural Rights.  We all have an equal right to pursue happiness, and to follow a moral path.  We, however, do not have equal powers and faculties.  We do not have an equal influence on society.  As a result of our labors we do not end up with an equal ownership of property and possessions.  If we were equal in each of those things, we would not have liberty, because government would be in place to make sure each of those things are equal.

While the French decided to try and fashion their own revolution after the American Revolution, their cry for liberty failed because it refused to integrate important ingredients that were a part of the American Revolution.  France rejected God, and inserted the theory of equality.  France, as a result, quenched liberty in blood.

The American Revolution was kept under control by documents limiting the power of government, and because the Americans fought their revolution "with a firm reliance on the protection of divine Providence."  The concept of liberty and a limited government through godly principles were followed by all of the new thirteen States.

In France, the leadership subordinated the liberties of men to the power of a government, following a more democratic government immediately responsive to equalitarian mobs.

Equality leaves no choice, no uniqueness, and no incentive.  If all men are equal by nature, there can be no differences and no distinctions, and therefore, no liberty and no prosperity of any individual for any reason.

Inequality creates freedom, the opportunity to pursue one's own religion, to learn according to one's own talents and capabilities, to work as hard as one desires and to seek the rewards that accompany those labors, to be virtuous or not, and to be as wealthy as one desires if their talents and hard work makes available such an opportunity.

Equality of wealth makes all men poor.  Equality of religion destroys all religion.  Equality of labor and reward renders all incentives moot and unavailable.  Equality homogenizes so that there is no innovation or the opportunity to rise up in wealth.  Government imposed equality is full dependency upon government, which is bondage. . . which is slavery.

Equality through government exists only in systems based on collectivism and despotism, both which are unconstitutional and contrary to the concept of liberty.  Equality in the eyes of God is hope, and the ability to seek one's own individuality in a system based on liberty.